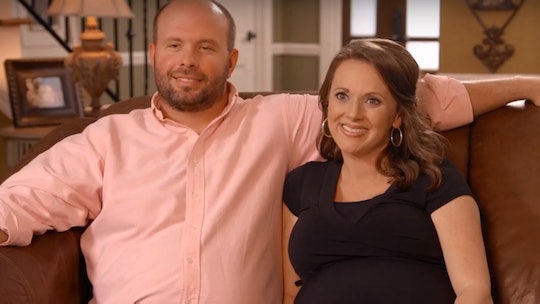 How Did Eric & Courtney Waldrop Meet? They've Been Together For 22 Years

Ever since Sweet Home Sextuplet premiered on TLC, viewers have fallen in love with yet another family with multiples. The show follows Courtney and Eric Waldrop of Albertville, Alabama, as they embark on their journey with a sextuplet pregnancy — oh, and they already had three young sons to start with. Which means they went from a family of five to a family of 11 when Courtney delivered the babies in December. With two episodes down, viewers are wanting to know as much as possible about this charismatic couple. In fact, many have probably wondered: How did Eric and Courtney Waldrop meet?

As it turns out, they've been together for quite a long time now. "Courtney and I, we've been together since eighth grade and never been with anybody else," Eric explained during the series premiere, which aired Sept. 18 on TLC. "So it's kind of like one of those I guess you could say not high-school sweethearts, junior-high sweethearts." Courtney added, "I really would call it love at first sight." (Awwww!) The couple went on to reminisce about how they'd tell people they loved each other back then, only to be told, "You don't know what love is." Except, it turns out they really did. "We'll have to remember that when our kids get to that point and they say, 'I love her,'" Eric said, with a laugh. "And I'll probably say the same thing."

Eric eventually proposed to Courtney while they were both attending Auburn University in Alabama, according to that first episode of Sweet Home Sextuplets. They graduated in May 2004, and ended up tying the knot in June 2004. "We don't even remember life before because it was like we were babies when we started dating," Courtney said.

According to TLC's profile on the Waldrops, the couple had their first child, Saylor, without any issues. When Courtney got pregnant again, however, she quickly miscarried. That's when they discovered she has a blood-clotting disorder — and if they continued to try to get pregnant without fertility treatments, there was a high likelihood Courtney would continue to have miscarriages. And so, with the help of fertility drugs, the Waldrops went on to have their twin boys, Wales and Bridge. When Eric and Courtney wanted to add just one more child to their family, they again went on a low dosage of fertility treatments — and instead wound up with sextuplets.

These days, they have a busy houseful of kiddos, which includes: Saylor; 6-year-old twins, Wales and Bridge; and 9-month-old sextuplets (three boys and three girls), Blu, Layke, Tag, Rawlings, Rayne, and Rivers, according to People.

Now, many people might assume that having nine children would be an obvious strain on a relationship. But apparently, that couldn't be further from the truth for the Waldrops. As Today reported, navigating life with their brood of children has actually strengthened their relationship. “I know that people would just say I’m just saying this, but honestly I would say that our relationship is stronger now than ever,” Courtney said. “We have nine kids together, and he’s my rock and he gets me through. We have to be there for one another.”

As a mom of three — and baby number four on the way — I'm shamelessly captivated by shows like Sweet Home Sextuplets. Not only can't I fathom being pregnant with six babies at one time, but the logistics of caring for six newborns (and three older kids) simply blows my mind. Honestly, I think it's equal parts curiosity and making myself feel better about my "chaotic" life that keeps me coming back for more. Although it's impossible to know what Courtney and Eric Waldrop's relationship is like off-camera, I think a lot of couples could learn a thing or two from their dynamic by tuning into TLC at 10 p.m. on Mondays. I know I have.