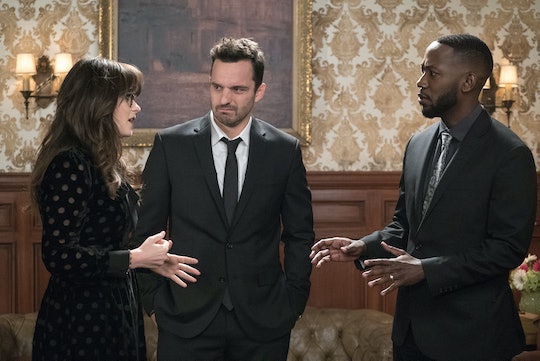 This Unexpected Death On 'New Girl' Will Break Your Heart

On a show like New Girl you don't expect casualties to occur, especially not to one of your favorite characters. However, in the final season there's unfortunately a death in the family. The preview for Tuesday night's episode has revealed that Winston's beloved cat, Ferguson, has died. But how did Ferguson die on New Girl? Well, there's one primary suspect.

In the preview Jess says, quite clearly, "I killed Ferguson." However, as much as I love Jess, she is quite known for being theatrical so it's possible whatever happened to cause Ferguson's death may not have been entirely Jess' fault. She may just be feeling a bit dramatic and guilty since Winston's love for Ferguson knew no bounds. Still, one has to wonder what exactly happened to lead to Ferguson's untimely death.

Ferguson first joined the cast in the second season. You may not recall, but Ferguson wasn't always Winston's friendly feline. In fact, he first belonged to Winston's former girlfriend, Daisy, but when Winston discovered she was cheating on him, he ended the relationship and took Ferguson with him, claiming Daisy didn't deserve a cat. Apparently, Daisy wasn't all that attached to Ferguson since she didn't really put up much of a fight. Ferguson has lived in the loft ever since.

Though Ferguson doesn't show up in every episode, when he does it's also an interesting time. Winston loves his cat probably almost as much as he loves Aly. Honestly, maybe even more. Winston and Ferguson do just about everything together and while their relationship can sometimes seem a little weird, it's clear it's filled with love.

That's why it's such a devastating loss for Ferguson to die and if Jess really did do it, this could wreck her friendship with Winston forever. But what could Jess have possibly done that resulted in Ferguson's death? Perhaps she gave the cat something to eat that she shouldn't have. Cats are allergic to beef, corn, lamb, soy, dairy products, and wheat gluten, so it's certainly possible Jess unwittingly fed Ferguson something that killed him.

But that just doesn't seem right. Jess has lived with Ferguson for years now, so you'd think Jess would already know what the cat can and can't have. Maybe, instead, Ferguson got a hold of some of Jess' craft supplies and ate something he shouldn't have. Or perhaps Ferguson somehow got lose and was hit by a car. This just seems a bit to gruesome for New Girl though.

Regardless of how Ferguson died, the preview indicates that his memorial service will be a grand affair. It turns out he actually died a year ago, some time during the time jump, so the episode will actually involve a memorial service for the cat. As a police office, Winston appears to have called in his fellow officers to sing at the service. Additionally, following the funeral there will also be a visit to a cemetery where Ferguson is buried, with a very fancy and Jewish headstone, so at least he went out in style. Then again, fans shouldn't have expected it any other way, really.

In addition, the death of Ferguson will also bring back a familiar face. In an exclusive preview on Entertainment Weekly, it appears that Coach will be back in town to mourn the loss of Winston's furry BFF. It also looks like he and Nick might be having some issues, though surely that will get cleared up sometime during the episode. The important thing is Coach is back! So while this episode may have some very sad moments, at least there will be something to celebrate.