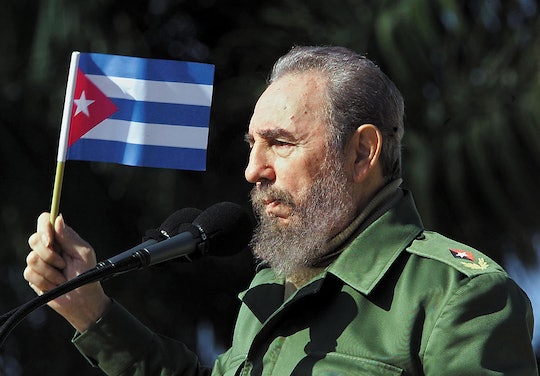 How Did Fidel Castro Die? His Health Had Been Declining For Years

Former Cuban President Fidel Castro died on Friday, according to his brother and current President Raúl Castro. Castro was 90 years old. Announced on state television, the news was somewhat of a shock, despite Castro's declining health. Many are left wondering, "How did Fidel Castro die?" as no cause of death has been released.

While Castro's declining health was well-documented, the socialist leader's scarce public appearances created doubts about his overall physicality and continued influence, by both world leaders and the Cuban people alike. Castro was hospitalized for diverticulitis in 2006, forcing him to hand over the majority of his power to his brother and former minister of defense, Raúl; a transition of political influence that allowed Castro (according to many) to remain relevant while prolonging his dictatorship. Others, however, argued that Castro had not had any political power in some time, and the complications to his health allowed him the ability to resign in a respectable manner.

Castro's last public appearance is thought to be in April of 2016, in which he looked reportedly frail in front of the Seventh Congress of the Cuban Communist Party. Castro's once-powerful voice was said to have been reduced to a "tinny squawk," as the revolutionist expressed his surprise at making it to 89 years of age.

Castro took power in Jan. 8, 1959, after overthrowing then-leader Fulgencio Batista. At just 32, Castro became the youngest leader in Latin America. From then on and until he turned the government over to his brother, Castro was unapologetic about his loyalty to socialism. He openly defied the United States and over 11 sitting presidents, brought the world to the brink of nuclear war during the Cuban Missile Crisis, and held onto power longer than any other living national leader, besides Queen Elizabeth II. A figure of strength to some, and a maniacal tyrant to others, Castro was nothing if not charismatic in his political rule. His swagger came second only to his reported ruthlessness.

While Castro is nothing if not a complicated individual, seen as an inspiring revolutionist to some and an evil communist dictator to others, the news of his death will continue to shock much of the world. When Carlos Rodriguez, a 15-year-old boy sitting in Havana's Miramar neighborhood, heard of Castro's death, he said, "That's not what I was expecting. One always thought that he would last forever. It doesn't seem true."