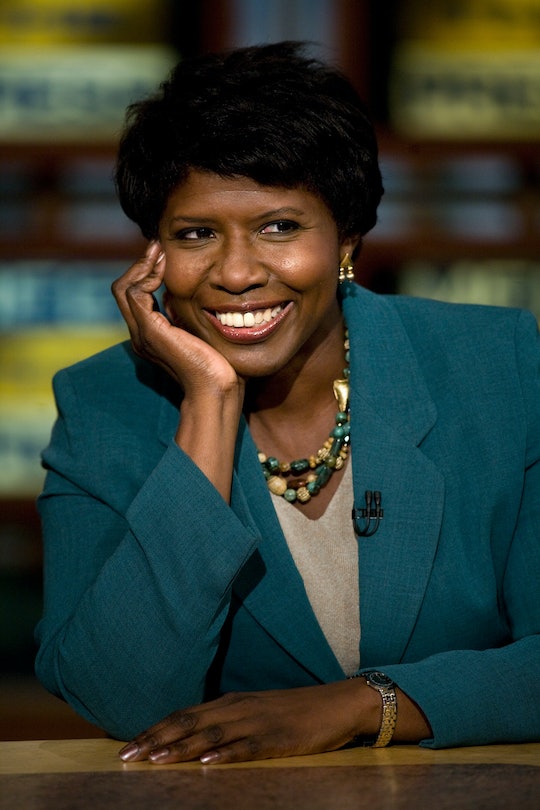 How Did Gwen Ifill Die? The 'PBS NewsHour' Host Passed Away At 61

Gwen Ifill, veteran trailblazing journalist, and host of PBS Newshour and Washington Week, has died at the age of 61, according to PBS on Monday. Ifill's work has undoubtedly been influential, significant, and inspiring to many throughout the years. Many longtime fans and career colleagues are now asking themselves two pertinent questions: How did Ifill die, and who of her contemporaries will handle the new D.C. transition period with the same finesse and professionalism?

According to an article published by PBS Monday afternoon, Ifill died after a battle with cancer:

It is with extremely heavy hearts that we must share that our dear friend and beloved colleague Gwen Ifill passed away this afternoon following several months of cancer treatment. She was surrounded by loving family and many friends whom we ask that you keep in your thoughts and prayers.

Sara Just, PBS Newshour executive director, wrote a letter in regards to Ifill's death, referring to the veteran journalist as a mentor and a "journalist's journalist" who "had a tremendous combination of warmth and authority," PBS reported.

Ifill, a boundary-breaking black woman, award-winning journalist, and author, was widely appreciated for her professionalism. She notably moderated the vice-presidential debates in 2004 and 2008, and the Democratic debate between Sen. Bernie Sanders and former Secretary of State Hillary Clinton in 2016.

Many on Twitter are reacting to the news of Ifill's death by sharing ways the veteran journalist was a remarkable inspiration to them throughout her career.

Jelani Cobb, a staff writer at the New Yorker, shared his appreciation for Ifill's meaningful, and groundbreaking work – especially considering the "tremendous amount of work" ahead for journalists covering the recent stunning results of the presidential election.

"We have a tremendous amount of work ahead of us," he wrote. "[I’m] heartbroken that we must do it without Gwen Ifill. Wonderful journalist and person."

During a news conference on Monday, President Barack Obama shared his and first lady Michelle Obama's condolences for Ifill's family. The president called Ifill "an extraordinary journalist" who asked tough questions by holding people in power in accountable.

As The Daily Beast reported, Ifill was born in New York City and graduated from Simmons College in the 1970s. She started her journalism career at the Baltimore Evening Sun and the Boston Herald American, NPR reported. She later worked as a national political reporter at The Washington Post, and a White House correspondent for The New York Times, before joining the PBS network in 1999. Her book, The Breakthrough: Politics and Race in the Age of Obama, was published in 2009.

Ifill, who has received more than 20 honorary doctorates, has undoubtedly been an important figure for all journalists. But for women, and especially black women journalists, her image and her work has been especially inspiring, considering the historic and continued lack of diversity in newsrooms and media organizations today.

Perhaps Ifill described her immeasurable trailblazing impact on young women of color best in a 2013 interview with The Times:

When I was a little girl watching programs like this — because that's the kind of nerdy family we were — I would look up and not see anyone who looked like me in any way. No women. No people of color. I'm very keen about the fact that a little girl now, watching the news, when they see me and Judy [Woodruff] sitting side by side, it will occur to them that that's perfectly normal — that it won't seem like any big breakthrough at all.