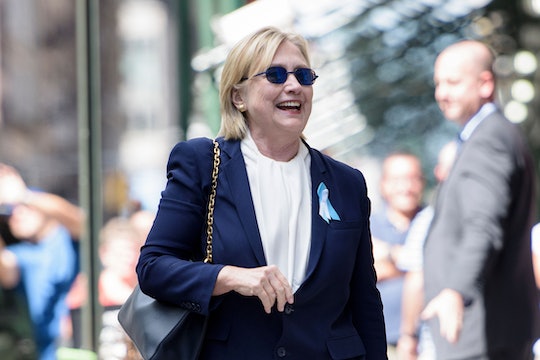 How Did Hillary Clinton's Staff Catch Pneumonia? It Can Be Contagious

Although everyone is focused on Democratic nominee Hillary Clinton's health, she's not the only one who has been under the weather. According to sources within the campaign, Hillary Clinton's staff also caught pneumonia or was sick in the past few weeks. Who knows who gave who what. In an interview with MSNBC on Monday, campaign manager Robby Mook admitted to being sick and not really recovering completely. "I probably came in a few more days than I should have over the last few weeks. I’m still actually recovering from the cough that I got through that," he joked. Press secretary Brian Fallon said that he also had a cold.

According to People, around six others have been sick, too. One top advisor was diagnosed with a respiratory infection and given antibiotics a few days before Clinton was diagnosed with pneumonia on Friday. Another was taken to the ER via an ambulance because of severe dehydration. Basically, the whole team is falling apart like on a bad sitcom.

Clinton has been facing criticism that she should have told the media or voters on Friday when her pneumonia was diagnosed. It would have explained her "coughing fit" earlier in the week at least, and then it wouldn't have been such a surprise when she left the 9/11 memorial service on Sunday afternoon. Apparently, though, that was Clinton's idea. And judging by the illnesses throughout the campaign — the normal thing to do when you're sick in politics is just keep going.

On Monday, Clinton's staff did admit that they could've handled the pneumonia diagnosis better, if only because some media outlets and voters on social media suggest that it looked like her "penchant for privacy," as David Axelrod calls it, makes her look shady AF. But other than the politics of it, it looks like the Clinton campaign needs to start taking care of itself. According to a Politico story on Monday, Clinton and her staff are fighting about hydration.

A source close to the campaign said that the former secretary of state suffers from chronic dehydration and sort of refuses to drink water. They alleged that once they went on a "frenzied" run for Gatorade and bunch of waters to hydrate the nominee. Being dehydrated also leads to being exhausted and lowers your immune system, so it's a recipe for disaster. That could be why she reportedly felt faint when she left Sunday morning's memorial.

Obviously, running a presidential campaign is hardcore, and it must feel like there is no time for sleep or self care. But the debates and election day are way too close for campaign staff to start drooping. Someone needs to get Clinton some Pedialyte so they can move on.