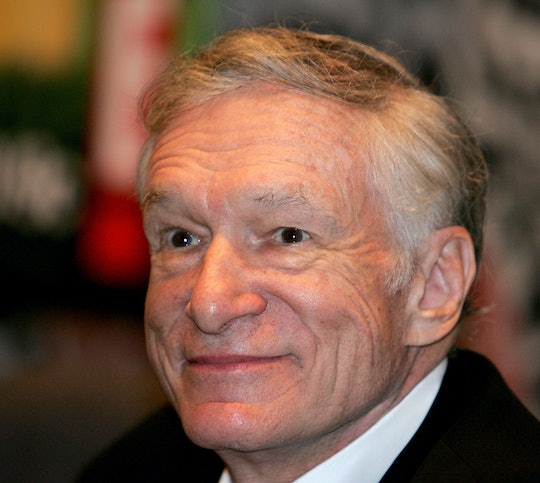 Late on Wednesday evening, the world learned that Playboy magazine founder Hugh Hefner had died. While the publishing legend was 91 years old, according to a statement, people are curious about how Hugh Hefner died and what, if any, health complications led to his passing.

Update (Oct. 3): Nearly a week after Hefner's death, it was reported on Tuesday, Oct. 3, that he "died of cardiac arrest and respiratory failure after contracting septicema — a blood infection — and drug-resistant e. coli," according to People magazine, citing his death certificate from the Los Angeles Department of Public Health.

Earlier: Hefner, who founded his company and media empire in 1953, "peacefully passed away today from natural causes at his home, The Playboy Mansion, surrounded by loved ones," according to the statement released on Wednesday evening.

Months before his death on Sept. 27, Hefner's son, Cooper Hefner, told E! News that his father was "doing fine" as rumors about whether he had been in poor health were circulating since the the publisher hadn't been seen out of his home for some time.

"My dad has always made the joke that if the mansion was your house, why would you want to leave?" the younger Hefner told E! News in April of this year. "I think because he has stepped back from the day to day operations of the business, people have thought that his health was not very good... The reality is he has a really bad back — that happens when you're 90 — and he is enjoying life at the mansion."

Before his passing, Hefner's son explained that he was spending time with his friends and family. "His friends still come over and watch movies," Cooper told E! News in the same April interview. "Everyone gets together for meals."

However, nearly a year prior to his death, Page Six reported that Hefner was "super sick." A source told the outlet in September 2016: "He looks like he is down to around 90 pounds and super sick. His people are really trying to keep this under wraps. You even have to sign a confidentiality agreement to go up to see him."

Despite reports that Hefner's health was not in good shape, his rep, like his son, reportedly Page Six at the time that he was "fine" and that the "past few years he has suffered with back pain that has made it a bit more challenging for him to get around."

And while Cooper had insisted on many occasion that his father was in good health, he admitted to The Hollywood Reporter just last month that it was "tough to watch him struggle." He added, "I’m just happy it’s physical and not mental."

Although Hefner had reportedly sold the infamous Playboy Mansion in August for $100 million, he was able to live there until he died due to stipulations made in the purchase deal, as E! News reported.

Hefner's son, who was recently made chief creative officer of Playboy Enterprises, remembered his father in the statement released on Wednesday:

My father lived an exceptional and impactful life as a media and cultural pioneer and a leading voice behind some of the most significant social and cultural movements of our time in advocating free speech, civil rights and sexual freedom. He defined a lifestyle and ethos that lie at the heart of the Playboy brand, one of the most recognizable and enduring in history. He will be greatly missed by many, including his wife Crystal, my sister Christie and my brothers David and Marston and all of us at Playboy Enterprises.

Aside from "natural causes," any other contributing factors leading to Hefner's death have not been released at this time. While learning of someone's death at the age of 91 is not necessarily shocking, news of Hefner's passing stunned the world. And whether his legacy is one that's favored by all, the Playboy founder will certainly always be remembered for years to come.