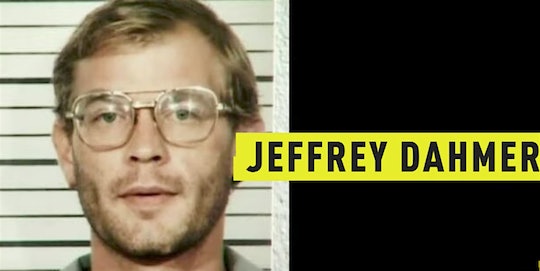 On the heels of Netflix's Mindhunter, which tackled the early days of criminal profiling at the FBI in the 1970s, comes a two-part Oxygen docu-series on the life of notorious serial killer Jeffrey Dahmer. Mindhunter follows the stories of real serial killers and takes place just as Dahmer began his decade-plus murder spree, so it's possible future seasons will feature him as a character. But in the meantime, Oxygen's Dahmer on Dahmer: A Serial Killer Speaks will give us a glimpse into his life from his perspective. But how did Jeffrey Dahmer die? It's a tragic end to a tragic story.

Dahmer was just two years into a 15 consecutive life term sentence at Columbia Correctional Institute in Portage, Wisconsin when he was murdered by fellow inmates while on work duty. Between 1978 and 1991, Dahmer had killed, raped, dismembered, and in some cases, consumed the remains of 17 men and boys between the ages of 14 and 33, most of whom were Hispanic, black, or Asian. Another inmate, Jesse Anderson, who killed his wife and blamed it on two black men, was also injured in the attack, and the prime suspect was a 25-year-old black inmate named Christopher J. Scaver, prompting authorities to believe that the slaying of Dahmer was at least partly racially motivated.

On Nov. 29, 1994, the three inmates were assigned to clean the bathrooms near the prison's gym. They were dropped off by a guard around 7:50 a.m. and Dahmer was found in a pool of blood on the floor at 8:10 a.m. A bloody broomstick was later found near the scene. He was pronounced dead at 9 a.m. and Anderson was found injured in a nearby shower. All three inmates were unattended for the 20 minutes between drop-off and when a guard found Dahmer. Michael Sullivan, secretary of the Wisconsin Department of Corrections, told The New York Times of the guards at the time, "They followed procedures. There was no irregular gap in supervision."

This had been the second attempt on Dahmer's life since he was first imprisoned. Earlier that summer, an inmate tried to slash his throat with a plastic knife, but he was unsuccessful. Dahmer spent his first year of imprisonment in isolation for his protection, but eventually decided along with the prison guards that it was safe enough for him to be integrated into the prison's general population of 622 inmates. He had been on work duty with Anderson and Scaver for three weeks prior to his murder.

The sister of one of Dahmer's teenage victims, Rita Isbell, revealed that she had been receiving phone calls from inmates at the prison assuring her that her brother's death would be avenged. According to The New York Times:

For the past two years, she said, she has been getting telephone calls from men identifying themselves as prison inmates, offering condolences and promises that Mr. Dahmer would be 'taken care of.' The last call came about six months ago.

'You don't know me,' Ms. Isbell quoted the caller as saying. 'I'm up here with Jeffrey Dahmer. Don't worry. We'll take care of it.'

Ms. Isbell said she did not know whether the calls were real or pranks. 'I wouldn't say I wanted it to happen like this,' she said. 'But Jeffrey tore my family up.'