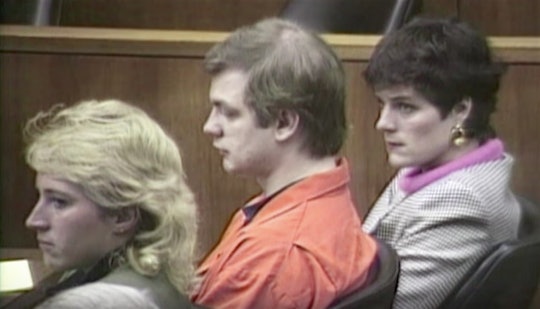 It's the 25th anniversary of Jeffrey Dahmer's trial and conviction. Among the projects memorializing the anniversary of his capture are the newly released indie film My Friend Dahmer, starring Disney alum Ross Lynch as the titular serial killer, and a two-part Oxygen documentary called Dahmer on Dahmer: A Serial Killer Speaks. The latter features interviews with Dahmer himself conducted during the two years he served in prison before he was murdered by an inmate in 1994. So how did Jeffrey Dahmer get caught? It's a harrowing story.

Reportedly, Dahmer's M.O. involved offering young men between the ages of 14 to 33 money and beer to come to his house and let him take nude photos of them. In a highly ritualized process, he would then kill his victims and preserve their bodies. Dahmer was eventually arrested in 1991 and sent to prison in 1992 after confessing to his crimes. After he was sent to prison, investigative journalist Nancy Glass secured exclusive access to Dahmer and aired the first television interview with him from behind bars. She continued to maintain a professional relationship, interviewing him several more times.

Dahmer on Dahmer looks at the case from his perspective through her interviews with him, including new interviews with people close to him. Involved in the documentary are his parents Lionel and Shari Dahmer, who have never spoken about the case before, and his surviving victims Billy Capshaw and Preston Davis.

In 1991, Dahmer approached three men with his usual offer of money and beer to come hang out at his apartment with him and let him take photos. One of the men, Tracy Edwards, agreed, and found himself handcuffed and being held at knifepoint in Dahmer's apartment later that night. Edwards asked to use the bathroom twice and on his second trip, waited for a lapse in Dahmer's concentration. In a moment when Dahmer wasn't holding his handcuffs, Edwards knocked him off balance with a punch and ran out the unlocked front door.

Once outside, Edwards flagged down two police officers with handcuffs still shackled to one wrist. He led police back to the apartment where Dahmer was still waiting. He admitted to police that he had placed handcuffs on Edwards, although he didn't give an explanation, and told the officers the keys were in his nightstand. While looking for the keys, officers found polaroids of body parts, obviously taken from inside the apartment they were standing in.

Police continued to look around, handcuffing Dahmer after he tried to fight them, and they eventually found freshly severed heads in his refrigerator. By the end of the investigation, seven skulls were found in the apartment, as well as two human hearts, a portion of arm muscle, an entire torso, and a bag of organs in the refrigerator and freezer. Elsewhere in the apartment were found two whole skeletons, a pair of severed hands, two severed and preserved penises, a mummified scalp and, three more torsos dissolving in an acid solution in a 57-gallon drum.

It was then that Dahmer confessed to the slayings in detail, and was more than willing to describe his psychological motivations and interest in murder (à la Netflix's Mindhunter, which takes place just as Dahmer began his two-decade killing spree). You can hear more from Dahmer's perspective when Dahmer on Dahmer: A Serial Killer Speaks premieres as part of a two-night event starting on Saturday, November 11 at 7 p.m. EST on Oxygen. This is one chilling documentary you won't want to miss.