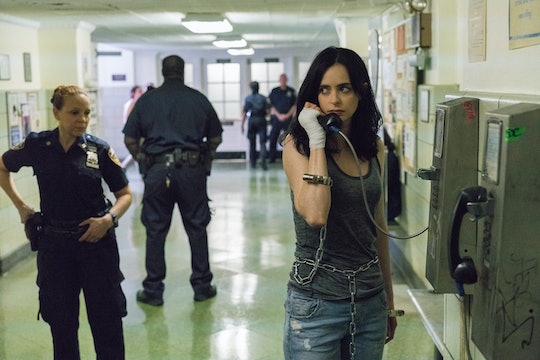 When viewers were introduced to Jessica Jones in the first season of her eponymously named series, she had already discovered her powers, tried her hand at being a hero, and survived Kilgrave's traumatic control. The show was not an origin story, but Jessica's origins seem to be important to the upcoming second season. So how did Jessica Jones get her powers? Fans have some of the details, but they're still missing key information.

Jessica developed her super strength as a teenager after suffering a car crash that killed her family. She spent some time in the hospital afterwards, and when she emerged she found herself capable of spectacular feats. In Season 1, Jessica and Trish discovered that Jessica's hospital bills had been taken care of by IGH, a mysterious organization that also gave Will Simpson the pills that resulted in his own super strength. This group must have had something to do with how Jessica received her abilities, but there is definitely more to the story than that.

The trailer for Season 2 offers a couple of clues. It seems like Jessica will start investigating the accident again, which leads her to some realizations that could further illuminate what happened to her 17 years ago.

In the trailer, Jessica mentions that "someone did horrific experiments" on her, but she doesn't explain just what those experiments were. The trailer only shows a glimpse of someone on a hospital gurney, so it wasn't any more elucidatory than the dialogue. There is a chance that Jessica herself doesn't know exactly what went on, because she says she has 17 years' worth of questions. In the aftermath of a traumatic accident, it's possible that Jessica was in no state to comprehend what was being done to her.

Another character, a woman new to the show, does offer something concrete, however. She informs Jessica that she had been brought back from the dead and her powers were a mere side effect, seemingly not the intended goal of whatever was done to Jessica. While IGH did seek to enhance other characters like Will Simpson, that might not have been the case with Jessica, which makes their motives even more confusing.

Jessica's backstory was different in the comics, so unfortunately there isn't much more to be gleaned from them that might explain what awaits her on the show. Some of the details remain the same: in both the comics and the show, Jessica was the only survivor of a car accident that killed her whole family. The difference was that in the comics, her family's car collided with a military convoy carrying radioactive chemicals. According to PopSugar, when Jessica came to later on, she had powers of super strength, flight, and invulnerability. Much like Matt Murdock's origin story, a tragic and random accident left Jessica forever changed.

Jessica Jones seems to be attributing Jessica's abilities to something more insidious, pinning everything on the unknown IGH even if their reasons for getting involved are unclear. It's still possible, however, that the show might fold in more aspects of the comics storyline. It looked like the Jones family did hit a truck, so perhaps it was a combination of hazardous chemicals and creepy agencies that led Jessica to become the hero she is.

Exactly what happened to Jessica is still up for debate, but from the looks of it, much of Season 2 will be devoted to digging up answers. The trailer may have been partially revealing, but it's likely that it was also a little bit misleading just to keep the audience guessing. There are sure to be unexpected reveals in Jessica's origin story.