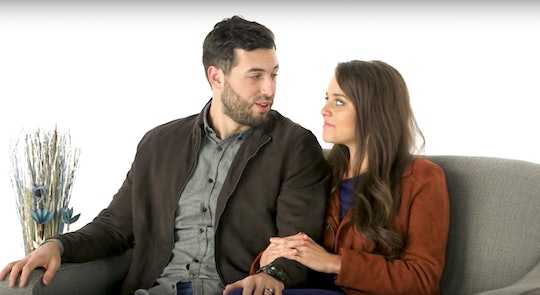 This Is How 'Counting On' Star Jinger Duggar Met Jeremy Vuolo

Watching people fall in love, get married, and start a life together is somewhat soothing, isn't it? And when those two people do so on national television, it's almost like a form of self-care to watch it all unfold. Such is the case with the Duggars and all of the Duggar daughters who have been courted. But, how did Jinger Duggar and Jeremy Vuolo meet? The two definitely have one of Jinger's sisters to thank for their courtship and marriage.

In fact, 23-year-old Jinger wouldn't have met her current husband if it wasn't for her brother-in-law, Ben Seewald, who is married to her sister, Jessa. According to Jinger and Jeremy's blog, it was Ben who formed a relationship with Jeremy, which eventually led to him traveling to Arkansas to meet the entire Duggar family.

In the couple's blog post, Jeremy described meeting the Seewalds as "an interesting happenstance," that took place when the couple was visiting San Antonio, Texas. Per the blog, Ben and Jessa were trying to find something to do in town before some of their plans and reached out to one of their friends for an idea. But when their friend was out of town, he recommended a church fellowship that his friend was going to, which just so happened to be held at Jeremy's house.

At the fellowship, Ben and Jeremy apparently hit it off and ended up exchanging contact information. According the couple's blog:

Over the next few weeks, Ben and I would call and text here or there just to keep in touch about how God was working in the ministry or to share an encouraging word from the Scriptures. It wasn’t long before we developed a friendship and two and a half months later I made a trip to visit Ben and Jess and it was then that I met Jinger and the rest of the family.

And after that, the rest is basically history. Well, OK, that's not true. As fans of TLC's 19 Kids & Counting as well as the current series, Counting On, will know to be true, the Duggar family has some pretty strict rules when it comes to dating. Really, they don't date, they either court or they are courted, and always with the intention of marrying the other person.

And even if a courtship is determined, there are still several rules that the Duggars must follow, according to their parents. Per TLC, the rules are as follows:

And it seems that all of the Duggar children seem to take these rules to heart. According to Jeremy and Jinger's blog, it was on a missionary trip with the Duggars that Jeremy asked Jim Bob for permission to court Jinger.

And after that, it was clear that the two were destined for each other. They announced their courtship on June 21, 2016, and just over a month later, on July 26 of that same year, the two were engaged.

Obviously, all true love stories are beautiful in their own way, but Jinger and Jeremy's is especially sweet since it was family that brought them together. And while the couple has just celebrated their one-year wedding anniversary on Sunday, it seems pretty likely that there will be plenty more anniversaries in the couple's future.