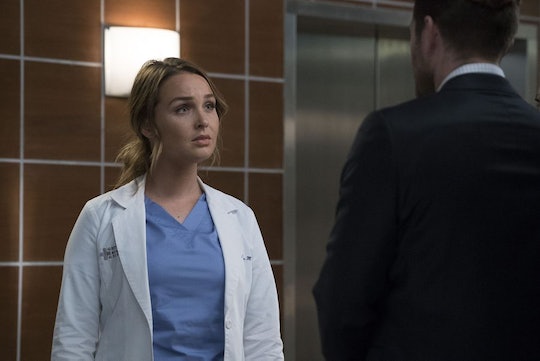 Jo's Abusive Backstory Is About To Be Revealed On 'Grey's Anatomy'

Grey's Anatomy returns this week and fans are ready for answers. The midseason finale ended with Jo coming face to face with her abusive husband, Paul Stadler, and it's anyone's guess what will happen next. But before the show moves forward, it'd be great to know more about Jo and Paul's past. For example, how did Jo and her husband Paul meet on Grey's Anatomy?

Jo first opened up about being married when she got drunk and DeLuca ended up taking her home. Upset about her possible break-up with Alex, Jo explained that the reason she couldn't marry Alex was because she was actually still married to an abusive husband who she ran away from. She told DeLuca that she'd been living in her car when Paul found her and then "she wasn't living in her car anymore." Presumably this is because Paul took her in, and though this doesn't give insight into how exactly they initially met, it does reveal how Jo ended up with Paul in the first place.

Unfortunately for Jo, things went south when the man she fell in love with began hitting her when she made small mistakes or he didn't approve of something she did. That was when Jo decided to go on the run, changing her name and starting over in Seattle at Grey Sloan Memorial Hospital.

The midseason premiere will focus primarily on Jo and the abuse she suffered at the hands of Paul, so fans will probably learn more about their history together. In fact, since the episode will heavily deal with the topic of domestic violence, the producers decided to break with the show's tradition of naming episodes after songs, and changed the episode title from "Four Seasons in One Day," to "1-800-799-7233," the number for the National Domestic Violence Hotline. The idea actually came from cast member Giacomo Gianniotti, who plays DeLuca.

Based on the trailer for the new episode, it's clear that seeing Paul again will have a great impact on Jo and understandably so. Thankfully, she'll have Alex and Meredith on her side, there to keep her safe and protect her from whatever Paul might be planning. Unfortunately, Jo will probably have to put up with Paul for more than one episode though, considering Matthew Morrison, who plays the character, has a recurring role this season.

Still, it'll be difficult for Paul to get close to Jo with presumably everyone in the hospital having her back. Even in some of the promotional photos for the new episode it looks like Arizona will step in at the very beginning when Jo and Paul first come face to face.

Although Jo will be protected, she may get pulled into Paul's orbit again because he won't be arriving to Seattle alone. According to TVLine, One Tree Hill alum Bethany Joy Lenz will also have a recurring role on this season of Grey's, reportedly as Paul's fiancée. It's possible Jo may want to warn her about Paul's abusive habits before it's too late.

If Paul hasn't been abusive to his new fiancée yet she may not believe Jo or take her advice, putting Jo in a difficult position. Will Jo put her own life at risk to try and convince a woman she doesn't know that Paul is unsafe or will she stay out of it and focus on getting a divorce from Paul so she can hopefully be rid of him for good? Thankfully, fans will get answers soon enough as Grey's returns Thursday, Jan. 18 at 8 p.m. EST on ABC.