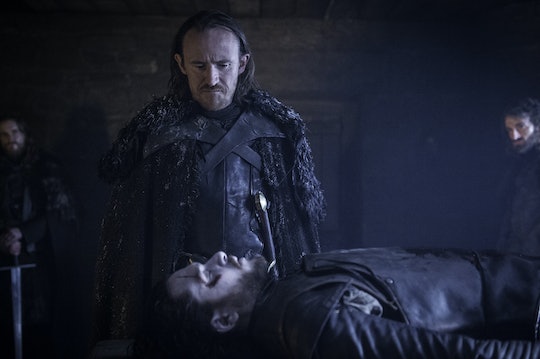 How Did Jon Snow Come Back To Life On 'Game Of Thrones'? The Moment Finally Happened

I love a good twist on TV shows, but when Jon Snow died on Game of Thrones Season 5, I was not OK. And when Jon Snow was still dead when Season 6 premiered, I was even more not OK. But, finally, the moment we've all been waiting for: Jon Snow is alive, again, and the world is slightly more right. But, how did Jon Snow come back to life on Game of Thrones? Well, there was some magic at play, and it was pretty awesome.

It only took two episodes to bring the beautifully dead Jon Snow back to life, but dammit, the show did not disappoint. Look, it wasn't like we didn't know it was going to happen. With the camera angle, the magical words by our girl Melisandre, it was only a matter of time until Jon's eyes shot open and we all screamed. But, even though I knew that was going to happen, I still screamed for 20 minutes, because that is just what you do when Jon freaking Snow is brought back to life.

But, how was he brought back to life? At the moment, it appears that Jon was brought back from Melisandre's magic. It's not the first time that she brought someone back to life, but let's be honest, this feels the most important. After some hair stuff went down, and some words that I didn't understand were said, Melisandre and Ser Davos left Jon Snow's body — dead — in the room where he was being kept. He was, for that moment, still dead. But, after a few cut aways to Ghost, Jon's eyes snapped open and the rest was history.

Except, it's not history, because there are still seven more episodes left in this season. Yes.

I do have to say there was a moment where I thought something was going to happen with Ghost and Jon coming back to life. There were too many moments the camera flashed to Ghost laying on the ground that I couldn't help but think that he was going to come through in Ghost. But, that doesn't seem to matter anymore because we've got the real life Jon Snow back in action.

But what does that mean? It means that there are some big secrets that are about to come out. With Bran seeing the past (Tower of Joy, anyone?), maybe we'll finally get to see R+L=J come to life.