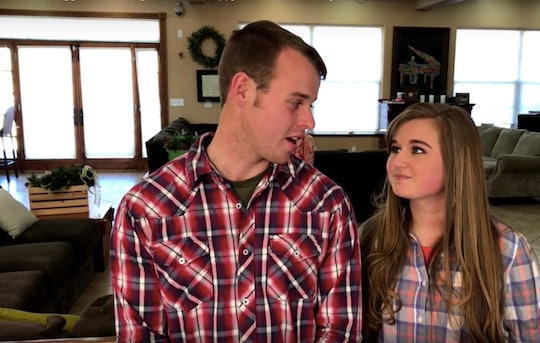 This Is How Joseph Duggar & Kendra Caldwell Met

Watching people meet, fall in love, and start a life together is a pretty exciting thing. And thanks to modern technology, just about everyone can experience that via reality television and one family in particular always draws in attention. No, not the Kardashians. I'm talking about the Duggars. So, when it comes to two of the newer faces in the spotlight, how did Joseph Duggar and Kendra Caldwell meet? Well, as it turns out, the newlyweds have known each other for a while.

In May, after Joseph asked Kendra to marry him at his sister, Joy-Anna's wedding, he told People, "Our families are close friends through church and this has allowed Kendra and me to get to know each other." In fact, according to Us Weekly, Kendra's father, who is a pastor, officiated the ceremony in Arkansas back in September. The two have reportedly known each other since they were young, as they ran in the same circles at church, and 23-year-old Joseph explained that his relationship with Kendra was very casual at first.

When revealing how he asked Kendra to enter into a courtship with him, Joseph said on an episode of Counting On, "I’ve known Kendra for about five years now and we met at their church. We’ve been talking for close to six months. I guess we would call it more of a friendship stage," according to People. However, all of that is different now, as the two are happily married and clearly in love.

On an episode of Counting On, Joseph explained his plans to ask Kendra to enter into a courtship with him, according to People, saying that he was taking her to a car auction as a decoy. He said:

Once we’re finished up with the auction, I’m going to take her to the house where I was actually born. It’s kind of on the way home, and then I’ll pop the question to her and ask her if she’ll start a courtship with me. It’ll show her where I started my life and then maybe we’ll be able to start a new portion of life with her there.

Obviously, Kendra said yes, and the two have been on the fast track ever since.

After their September wedding, the happy couple talked exclusively to People about their new life as a married couple. "It’s really an amazing feeling to know it’s official and we’re really married," Joseph told the publication. "Once we were engaged time seemed to move so slowly and now here we are — married! We’re just enjoying every bit of it." And Kendra agreed, telling People, "One of the most enjoyable things about being married to Joe is just being together so much. I can hug him, kiss him, talk with and be with him all the time."

As fans of the show will know, the Duggar family has a very specific, and strict, set of rules when it comes to dating and marriage. Well, the Duggars don't really date. Everything they do is very intentional, and that includes love. According to E! News there are several important rules for the Duggars regarding romance:

So clearly, now that Joseph and Kendra are married, they're able to be alone together and live their lives as adults. Speaking to People, 19-year-old Kendra said, "Being with your best friend makes marriage amazing." And while the two were on their honeymoon, they definitely appeared to be enjoying their alone time. "Here in Greece, we’re looking forward to having dinner in the sky, walking through the market, making sandals, going parasailing and paddle boarding," Kendra told People at the time.

Clearly, having met at church when they were younger has worked out for Joseph and Kendra, and the two are happy as can be!