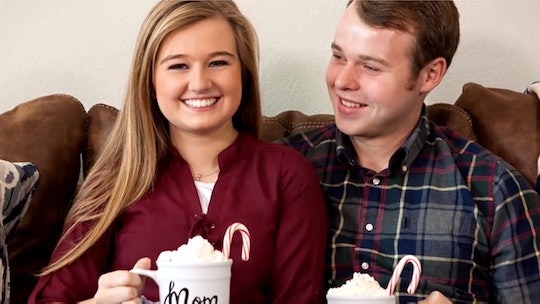 Counting On fans recently saw Joseph Duggar marry his then-fiancée Kendra Caldwell. And months before their nuptials aired on TV, the newlyweds announced that they're expecting their first child together — a boy! But if you're just tuning in, you might be wondering where it all began and how exactly Joseph Duggar proposed to Kendra almost a year ago.

As it turns out, the proposal actually happened in front of his family at one of his sister's weddings. When Joy-Anna Duggar married Austin Forsyth on May 26, 2017, the 23-year-old expectant father popped the question. Yes, he proposed to his now-wife at his sister's wedding and, don't worry, he didn't do it in the middle of giving a toast or totally spring it on them. Joseph actually had permission from Joy-Anna to propose to Kendra then, "nearly two hours into her wedding reception," as In Touch Weekly reported.

The now-soon-to-be father was still nervous about proposing, because popping the question tends to do that to the one proposing. "I was definitely nervous going into it, but I wasn’t afraid that she was going to say no, because she has said, 'I'm just waiting on you!'" he told People after their engagement was announced.

The Duggars clearly have no issue with sharing the spotlight and because he did it in a room with a professional photographer standing by, Joseph and Kendra now have some fantastic photos to remember their engagement.

Given how much Duggar news there's been recently, it's nice to reminisce about how this love story started. The couple has already married, honeymooned in Greece, and announced that they're expecting their first child together — all happening within three months since tying the knot. "I've always dreamed of having my own family, and it's really just kind of surreal that it's actually here," Joseph explained in a video announcement alongside his wife, according to E! News.

It's clear that the couple truly wanted to start a family together and their announcement says it all. Speaking to Us Weekly back in December, the couple said:

During this season that we are celebrating the birth of Christ, we are so excited to share with you that we are expecting the gift of a child ourselves! Wow, it’s so exciting!!! We’ve both always loved children and seen them as a real blessing from God. It’s so surreal to think of being parents and having our own little one. We cannot wait to see this new baby!

Their baby may be here sooner than you think. As Us Weekly reported, Kendra's due date could fall right on Father's Day 2018. And it seems like Kendra has no doubts in her husband's parenting skills, saying that he's "very natural" with Joy-Anna's son, Gideon Forsyth, according to Us Weekly. "I think he’s definitely going to be great," she told the publication.

Their kid will undoubtedly ask them one day, way in the future, how they met and how Joseph popped the question. And, lucky for them, they have a pretty sweet story.