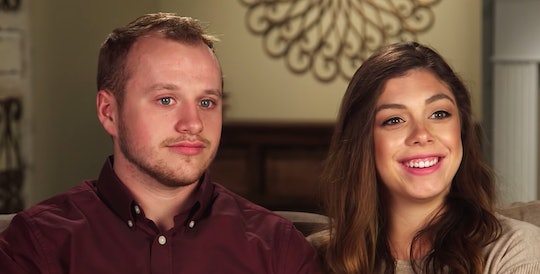 Josiah & Lauren Duggar Were First Brought Together By Their Religious Beliefs

When a Duggar enters into a courtship (dating with the ultimate goal of marriage), Counting On viewers aren't initially given too many details about the relationship. Which makes sense because not all courtships result in marriage, after all. Once a couple is engaged, however, the couples tend to open up more about how long they've been interested in one another, how they met, etc. And thanks to a new Instagram post, fans now know how Josiah and Lauren Duggar met. As it turns out, the two have known each other for almost a decade, and religion played a big role in their first meeting.

If you remember, Lauren wasn't the first person Josiah courted. He was in a courtship with Marjorie Jackson from April to August 2015, before announcing they were no longer together. "A few weeks ago Marjorie and Josiah agreed to end their courtship, keeping in step with what they believe the Lord’s will is," Michelle and Jim Bob wrote on Facebook at the time. "Both are thankful for the time getting to know each other, and their families continue to enjoy each other’s company and close friendship.”

There was a significant break from the time Josiah and Marjorie called it quits to when the Duggars announced Josiah had entered into a courtship with a new woman: Lauren Swanson. Interestingly, however, the news in January 2018 didn't come as a huge shock to Counting On fans. That's because just a few weeks beforehand, Josiah was photographed sitting with a "mystery girl" while on a trip with his family. Apparently, Swanson had accompanied the family on a trip through Australia and New Zealand, where they spoke at a conference.

From there, Josiah and Lauren's relationship followed a typical Duggar timeline. They were engaged by March and tied the knot in June 2018. And after suffering a miscarriage at the end of 2018, Josiah and Lauren are expecting a baby due in November.

But what's interesting? Josiah and Lauren have actually known each other for quite some time. That's because she's a childhood friend of the Duggar family, according to Newsweek — and Lauren even appeared in an episode of 19 Kids & Counting back in the day. What Josiah and Lauren have never addressed was how they first met. Until now, that is.

In a candid Instagram post listing 11 facts about herself, Lauren revealed when she first laid eyes on Josiah. "Met the Duggar family in 2010, at the ATI conference in Big Sandy, TX," she wrote on a photo of herself on Sept. 11. (ATI stands for Advanced Training Institute — the religion-based homeschooling program the Duggars use, btw) "So yes, I watched Josiah grow up; I remember him as the funny/talkative little kid."

There you have it, folks! Although it's been less than two years since Lauren and Josiah started officially courting, they have actually known each other for almost 10 years! (Considering Josiah is 23 and Lauren is 20, that's almost half of their lives right there.) And it makes complete sense that they met at a Christian homeschooling convention. If they didn't share the same religion, it's unlikely they ever would have met.

With their shared history, the passion they have for their religion, and the love they have for each other, Lauren and Josiah seem like a perfect matchup. I wish them the best of luck as they soon embark on an exciting new journey together, aka parenthood.