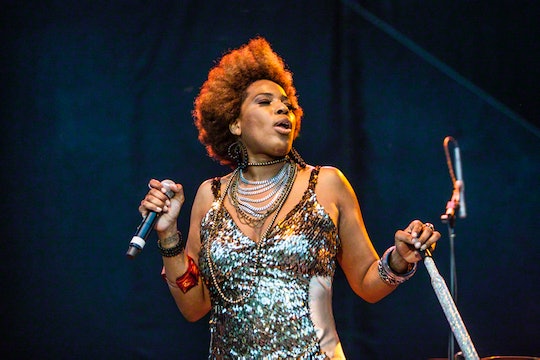 How Did Macy Gray's 'Fuller House' Appearance Happen? We Promise It All Makes Sense

If you thought the men from the original Full House were the only guest stars to show up on the Netflix sequel, Fuller House — surprise! There are plenty of other special cameos scattered throughout the first season. (Still no Olsen twins as Michelle Tanner, though. Bummer.) Most surprising was Macy Gray's appearance in a nightclub in episode two. Hang on a second — how did Macy Gray's Fuller House appearance happen? Let's set the scene — and, it's kind of a weird one.

In the third episode, Stephanie, played by a very grown up Jodie Sweetin, and next-door-neighbor-turned-live-in-sister-wife-but-not-really Kimmy Gibbler (the shockingly astute Andrea Barber) take their big, widowed older sister D.J. (Candace Cameron Bure) on a much needed girls' night out. Kimmy has dubbed the group the "She-Wolf Pack" as they hit up the nightclub, Euphoria. And who's the headliner? Why, none other than Grammy Award-winning musician, Macy Gray, of course! Wait, what? Turns out Gray's little musical cameo might have something to do with another pair of guest stars in that same episode: Maksim and Valentin Chmerkovskiy — and a Dirty Dancing homage. Can you guess the common thread here? It's Dancing With The Stars.

Gray performed in season nine of DWTS in 2009. During her first dance for the reality show, judge Carrie Ann Inaba said of Gray's performance: "There's something fascinating to watch about you. Your technique — I can't even go there. It was beautiful in its own bizarre way." Gray was eliminated the next week.

Gray is no stranger to cameo and guest appearances, often appearing as herself. Gray has had cameo spots playing herself in Spider-Man, Scary Movie 3, Ally McBeal and even the kids' show, Blue's Clues — so a Netflix reboot of a '90s classic doesn't seem so out of line now, does it?

Fuller House has proven throughout each episode that it's a highly self-aware show. As Gray and Stephanie duel over the mic singing "Time Of My Life," even Gray acknowledges that her guest starring appearance feels a little out of place. After the lengthy Dirty Dancing dance-off homage, Gray shouts into the mic: "What am I doing here? I won a Grammy!"

You're a good friend to Candace, Macy. That's what you're doing there.