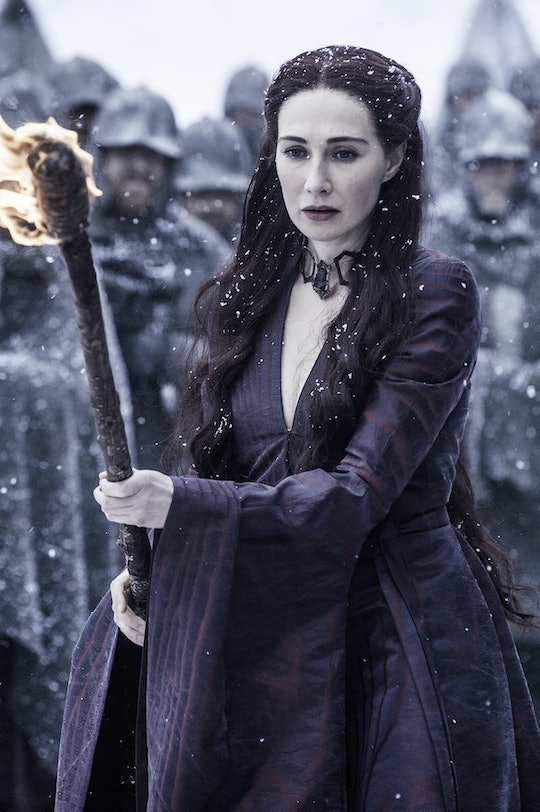 How Did Melisandre Bring Jon Snow Back To Life On ‘Game Of Thrones’? It's Unbelivable

Raise your hand if you are still screaming because the thing showrunners said would never happen on Game of Thrones Season 6 just effing happened. He is once again conscious and breathing, but how did Melisandre bring Jon Snow back to life on Game of Thrones? The Red Woman did have a momentary crisis of confidence.

Ser Davos approaches Melisandre in Season 6's second episode, titled "Home," and confesses that, like literally every last one of us, he assumes she knows why he's there.

"It's about the Lord Commander," he says.

What ensues is the discussion we've all been having about whether Melisandre has or knows of the power to resurrect Jon Snow.

"There are some with this power," she admits with a pretty strong whiff of uncertainty.

"I met a man who came back from the dead but the priest who did it... it shouldn't have been possible," Melisandre shudders.

Davos patiently points out everything the rest of us have been saying all year, about the myriad of seemingly miraculous ways in which Melisandre's magic has manifested, from her surviving a poisoning to birthing a shadow demon.

"I'm not asking the Lord of Light for help," Davos pleads with a resistant Melisandre. "I'm asking the woman who showed me that miracles exist."

She insists that she doesn't have the gift of bringing humans back from the dead, but Davos gently challenges her, asking, "Have you ever tried?"

Clearly insecure with the magic she's about to perform, Melisandre carefully gives Jon a nice sponge bath, cleaning his wounds. She also rinses his hair and cuts several locks from both his head and his beard to drop into a torch's flame while reciting an incantation. Finally, she lays hands on Jon and appears to repeat the same incantation several times, seemingly willing it to work. She even begs aloud in English, "Please," to no one in particular.

But after several attempts, it seems pretty clear that Melisandre doesn't have the power necessary to revive Jon. She, Ser Davos, and his men all depart, leaving the body alone in the room with Ghost, Jon's direwolf.

Considering how much cameratime Ghost gets in the ensuing closeups, it seems fairly obvious to viewers that he had something to do with what happens next: Jon's eyes fly open and he gasps several deep breaths.

But it's also possible that Ghost was just doing that amazing pup thing where they sense the presence of their owners and perk up. Either way, it seems like Melisandre's incantation, no matter how skeptical she was that it was going to work, has done the trick. We don't know, of course, whether Jon is whole and/or wholly himself again, but needless to say, the impossible has become possible at the hands of The Red Woman.