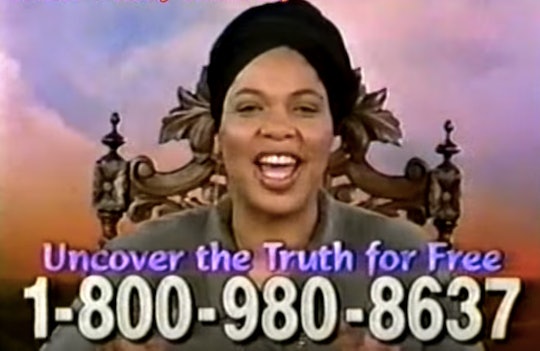 How Did Miss Cleo Die? The TV Psychic Was Recently Hospitalized

One of the world's most beloved TV psychics died Tuesday morning at age 53, according to TMZ. Miss Cleo died of cancer in Palm Beach County, Florida, after a recent hospitalization that left her in hospice care. She was originally diagnosed with colon cancer, which eventually spread to her liver and lungs. Miss Cleo, whose real name was Youree Harris, became famous in the '90s for her spitfire personality, big smile, and rambunctious TV advertisements, and her fans followed her long after her Psychic Readers Network show ended.

The Los Angeles native used her Miss Cleo persona on air and answered called-in questions that ranged from paternity issues to love to infidelity, all with her familiar touch of charm and kindness. Her famous "Call me now!" ads ran from 1997 to 2003, and showed her flipping tarot cards as she answered worried callers' questions.

After Miss Cleo's stint on the Psychic Readers Network ended, she mostly stepped out of public view. She played a part in Grand Theft Auto: Vice City in 2002, and in 2006, she came out to the public on The Advocate. More recently, she was interviewed for the 2014 documentary Hotline, where she spoke about her four to five years working for a psychic hotline.

When Vice interviewed Miss Cleo in 2014, she said she still had clients who used her psychic services. "Oh yeah, my clients are international, sweetie," she said. "I have clients in New Zealand, Australia, a few here in Toronto, a bunch all over the US, Jamaica, obviously. Honey, that’s how I make my living still. I’ve got kids and grandchildren, I like being able to help."

"I come from a family of spooky people," she told Vice. However, she wasn't quite the woman represented in her network ads, either. "My parents were not broke; I went to a very high-end boarding school. The people I used to work for didn’t want people to know that I was an accomplished playwright. ... They spent a lot of time trying to make me into something that I completely was not. I speak perfect English."

Just like she did in her show, Miss Cleo remained caring, honest, and no-nonsense after her network stint ended. When confronted by people about her put-on patois or the network implosion that led to a lot of negative media attention, she was hurt — and didn't hide it. "It’s taken ten years for me to move through all of that," she told Vice. "So it hurts for people to go around and be able to tell a lie to the point where it becomes fact on a [computer] box. So I struggle with it."

It seems that, even after her death, Miss Cleo still has a lot to teach the world a lot about vulnerability, honesty, and having fun.