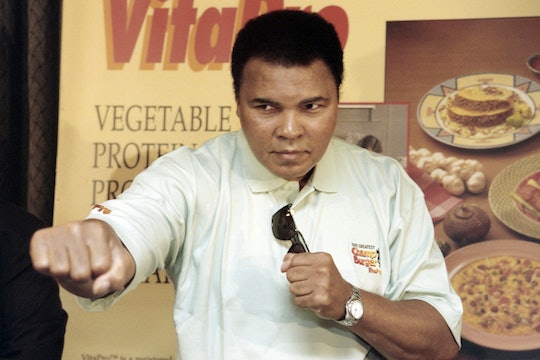 How Did Muhammad Ali Die? He Was Recently Hospitalized For This Reason

The world was rocked on Friday when news broke out that 74-year-old beloved boxing legend Muhammad Ali passed away. Ali had been hospitalized on Thursday but his condition had begun to worsen by Friday. But how did Muhammad Ali die?

The courageous, risk taking, and often undefeated boxing champion died from respiratory complications, according to a spokesperson who spoke to NBC News. Late Thursday, Ali's children reportedly flew to Phoenix to be at their father's bedside and by late Friday a source close to Ali said that the heavyweight boxer was in "grave condition." Earlier on Friday, Ali's spokesperson confirmed to the AP that Ali was in the hospital in fair condition. However, two separate unnamed sources told the AP that Ali was hospitalized due to respiratory issues that had been complicated by Parkinson's Disease.

Ali had struggled with Parkinson's Disease for quite some time and had been in and out of the hospital for the past few years. In 1984, Ali was diagnosed with Parkinson's. In the late 80's, doctors concluded that Ali's Parkinson's was caused by multiple hits to the head as a boxer, causing injuries to the brain.

According to the Mayo Clinic, Parkinson's is a "progressive disorder of the nervous system that affects movement." The disease tends to develop gradually, but as the symptoms of the disease worsen, the condition worsens as well.

Ali's wife, Lonnie gave a very heartfelt interview to the AARP in 2014, speaking about Ali's struggle with Parkinson's. "We are on this journey for a reason, I know that — whether it was to bring attention to this illness [or] whether it was to save his mortal soul," Lonnie said.

Within time, Ali's death will bring more attention to Parkinson's and the complications that Parkinson's causes to health.

More Like This
Marie Kondo Gives Up Tidying Post-Kids, Sparking Joy For Moms Everywhere
10 Great Podcasts That Will Keep Your Kids Entertained On Your Next Family Road Trip
Sally Field Is The Ultimate Cool Mom Who Once Tried To Set Her Son Up With An Olympian
Does The FDA's Plan To Limit Lead In Baby Food Go Far Enough?
What Parents Are Talking About — Delivered Straight To Your Inbox