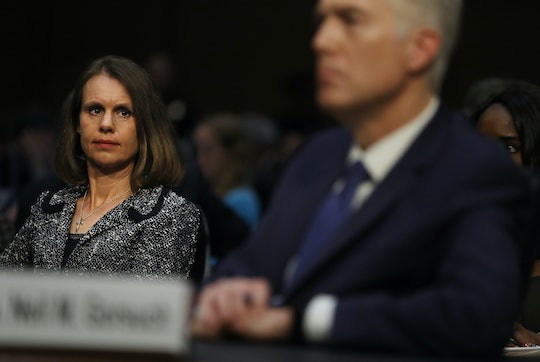 This week President Donald Trump's pick for the Supreme Court, federal judge Neil Gorsuch, has been answering questions about himself, his career, and his politics during his confirmation hearing before Congress. Gorsuch shared where he stands on a number of controversial political issues, but there were also some he didn't comment on. Many who aren't politicians are just wondering who Gorsuch is as a person, and are wondering about his family, including his wife. How did Neil and Marie Louise Gorsuch meet? She's actually not from the United States, and they didn't meet here.

Gorsuch, 49, is one of the youngest Supreme Court nominees in history and has spent the majority of his career as a federal judge on the 10th Circuit Court of Appeals, a position to which he was appointed by former President George W. Bush, according to his nominee profile on SCOTUS blog.

Growing up, Gorsuch lived with his family in his home state of Colorado for several years until moving to Washington, D.C. after Gorsuch's mother was appointed to the EPA in the 1980s, according to The Washington Post. After graduating from Georgetown Preparatory School, he went on to attend Columbia University, then Harvard Law School, where he obtained his juris doctor degree.

Gorsuch met his wife Marie Louise (who goes by just Louise) while he was a student at Oxford University in England (Gorsuch received his legal philosophy doctorate for research on assisted suicide and euthanasia). They met on a blind date and were married the following year in 1996, according to The Telegraph.

Gorsuch and Louise have two daughters: Emma, 18 and Belinda, 16, according to an article from The Denver Post in 2006. Louise is listed on public documents as a homemaker and mother, according to the International Business Times.

Louise's side of the family remains in the United Kingdom, and they have spoken to the British Press about their son-in-law's appointment. Louise's mother, Prudence Burletson, told The Henley Standard:

It’s a happy occasion but it’s also quite terrifying because it’s going to be vicious. There’s going to be blood on the carpet but that’s politics I suppose. So I’m thrilled but I’m a bit apprehensive.

She also added that although both Gorsuch and Louise are Republicans, prior to his nomination by Trump they had not discussed him: "Everybody asks me if she [Louise] was a Trump supporter and neither of them commented much."

Gorsuch thanked Louise and his daughters in his book, The Future of Assisted Suicide & Euthanasia, which was published by the Princeton University Press in 2006. After the announcement of his nomination, Gorsuch tearfully thanked Louise, saying he "could not attempt to do this" without her by his side for the last 20 years.