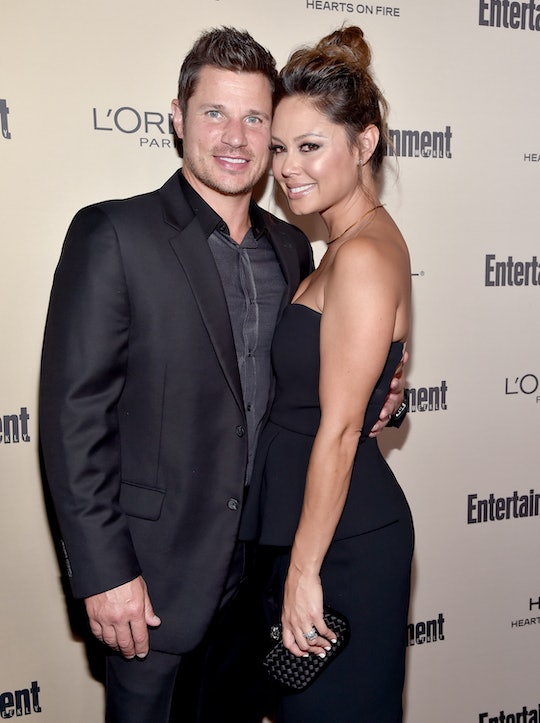 Nick & Vanessa Lachey Share A Love Story For The Ages

Sometimes a celebrity couple springs up before our very eyes, as is the case with Nick Lachey and his wife Vanessa, formerly Mannillo, who are now about to compete against each other on Dancing with the Stars. So how did Nick and Vanessa Lachey meet? Theirs is a long love story that started over a decade ago, believe it or not.

As you probably remember, Nick was first married to Jessica Simpson. The couple went on a very public reality show called Newlyweds: Nick and Jessica, pioneers in the world of turning one's life into reality television. The whole world watched them bicker about money and Chicken of the Sea, until sadly, they ended their marriage after three years together. However it looks like the breakup was for the best, as both of them have moved on and seem happier than ever with new partners and adorable children.

So when did Nick get together with Vanessa? It all started when he filmed the music video for his song "What's Left of Me," the title track of the album he wrote after his public divorce. Probably because of all the publicity, the song shot to the top of the charts. And then he met his future wife, Vanessa.

Nick and Vanessa Lachey had probably met before the music video, of course. For years, Vanessa Mannillo was a host on MTV's Total Request Live, where Nick and Jessica Simpson certainly were guests at one point or another, as they both had albums and a television show to promote. But Nick was married then, and a relationship definitely wouldn't have been appropriate.

After the divorce, Vanessa starred in Nick's "What's Left of Me" video, playing a sort of Jessica Simpson-like character, having deep talks with Nick on the couch while surrounded by cameras, then eventually smashing a wine glass off of the kitchen counter in a fit of fury. Very intense. According to MTV, Vanessa left the set enamored with Nick. "Nick is awesome," Vanessa said on Making the Video. "He's a gem. Mini crush."

Well clearly it was more than a "mini crush," Vanessa, seeing as the couple went public with their relationship soon after Nick's divorce was finalized in 2006. Though Nick was also briefly linked to Kim Kardashian of all people during the decade since his split with Simpson, Nick and Vanessa have been going pretty strong, with only a few relationship hiccups along the way, such as when they took a brief break from one another in 2009.

By 2010 the couple were engaged however, having dating for four a half years. Nick has said that the short split helped them to come out the other side stronger for it, telling Access Hollywood:

The way I’ve always looked at it is, if you come out on the other side and you’ve learned something and you can kind of apply it to the next time that situation comes up, then you’re growing as a couple, and that’s what exciting to me. If you continue to grow as a couple, then you’re in good shape.

He may be right about that considering the state of his relationship today. He and Vanessa have now been married for six years and are the parents of three adorable children: Camden, Brooklyn, and Phoenix. For their next adventure, these two are going to be competing for the Mirrorball Trophy on Dancing With the Stars, paired with other married couple Peta Murgatroyd and Maks Chmerkovskiy. Perhaps a little healthy competition is the Lacheys' other secret to a healthy marriage. Whatever it is, I hope they share it with the rest of the world.