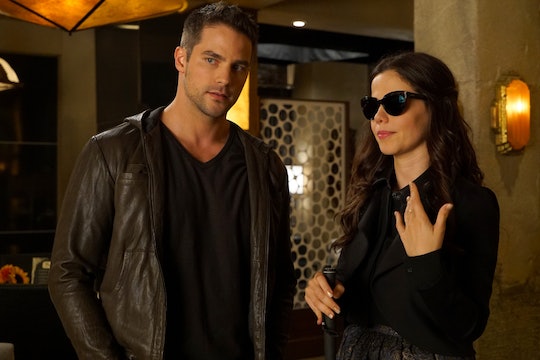 How Did Noel Die On 'Pretty Little Liars'? It's Pretty Twisted

"Off with their heads!" is what Pretty Little Liars executive producer, I. Marlene King, probably said when thinking about the Season 7A finale. Leading up to the midseason finale fans were promised that someone wouldn't make it out of the episode alive and that promise was kept in the most horrific way. Noel Kahn will no longer be bothering the Liars because now he's dead but how did Noel die on Pretty Little Liars? It's kind of complicated.

In what's being known as the #PLLDeathTrap, the Liars found themselves in an abandoned house/school for the blind, to exchange Noel's hard drive for the tape of Hanna kidnapping Noel. Of course this exchange wasn't simple. Jenna, over a loud speaker, told the Liars to leave the hard drive on the table and then they went upstairs to get the tape. Although it seemed the Liars were home free with the tape, Emily forgot her cell phone so she and Hanna headed back upstairs to get it, where they were then hunted by Noel. Why Noel waited until this moment to start hunting for the Liars when they were all upstairs not too long ago remains a mystery. Whatever his reasoning he began his hunt of Emily and Hanna and grabbed an axe that for some reason was in a school for the blind.

Hanna and Emily are able to get away from Noel and Hanna hits Noel from behind, causing him to drop the axe. Then Noel swings, trying to hit one of the girls but is pushed back, hits the wall, and falls right on the axe, and his head literally rolls. It seems the axe was probably not the best choice of weapon for Noel but we all make mistakes. Although it was an accident this is the second time this season someone's ended up dead at the hands of Hanna. If I didn't know any better I'd say she was killing these people on purpose.

With Noel gone and Sara Harvey also dead it seems Jenna is fresh out friends. So what will she do now? Well after Jenna shot Spencer it looks like A.D. has his hands on Jenna now. Could they be teaming up or is Jenna the next to die? Unfortunately we'll have to wait until April to find out.