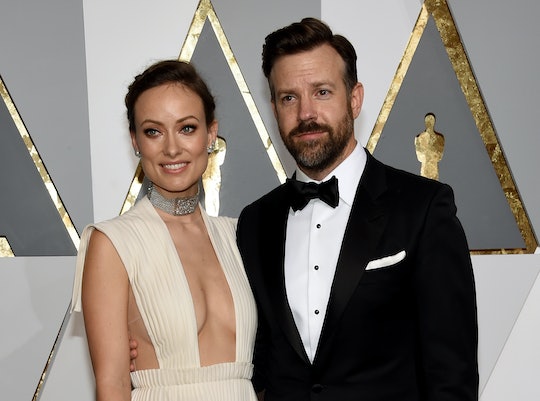 How Did Olivia Wilde & Jason Sudeikis Meet? Their Story Is Adorably Down To Earth

Baby news has been booming through the media for the past few weeks, but this baby-on-board is no rumor — Olivia Wilde is pregnant with her second child with fiancé Jason Sudeikis. The actress announced the news on her Instagram this Monday with an adorable photo of herself in a bikini and her son two-year-old son Otis holding their bellies, along with the sweet caption, “Matching baby bumps.” The proud parents have been an item for five years now and have been obviously in love ever since. However, some may be wondering how the romance began in the first place — or more specifically, how Olivia Wilde and Jason Sudeikis met.

It wasn't exactly love at first sight, but there were definitely sparks. In an interview with Marie Claire in 2013, the actress said she met the “love of her life” at the finale of Saturday Night Live in 2011, but didn’t go on a first date until six months later.

“I was just learning to be myself; I’d been divorced nine months,” Wilde said in the 2013 Marie Claire interview. “We were both seeing people but were single. He seemed to really see me, see through the bullshit. He said very few words and couldn’t keep eye contact. He was so handsome, and he could dance.”

The Vinyl actress was taken by the handsome comedian’s charm, skill on the dance floor, and his quick wit. But it turns out Sudeikis was shy to get her digits.

“I met Jason, and I thought he was so charming,” Wild said in an Allure interview in 2013, adding adorably,

He’s a great dancer and I’m a sucker for great dancers. But he didn’t even get my number. Over the next six months we kept running into each other. [One night], my best guy friend walked up to him and said, "This is Olivia’s number. Use it." That was the beginning.

And she had more than one friend rooting for the Saturday Night Live alum. Wilde's best friend and actress Megalyn Echikunwoke told Marie Claire in the same 2013 interview that she knew the couple’s chemistry long before her bestie did. “You’re going to end up marrying him,” Echikunwoke had told Wilde, according to the magazine.

Six months after the meet cute, the couple had their first date in New York City, where they now call Brooklyn home.

“We closed the restaurant down at 2 a.m.!” Wilde told Marie Claire in that same 2013 interview. “He didn’t kiss me, and I was madly in love. I was overwhelmed.”

Two years later, the couple got hitched, announcing their engagement in January 2013, shortly after the holidays. No official or extraordinary wedding plans have been announced yet for the couple, but it seems like they don’t need a piece of paper to take on the married couple roles.

At the Golden Globes this year Wilde referred to the SNL funnyman as her “husband” and surely the rumors began stirring of a secret wedding.

Entertainment Tonight asked the couple at the awards show if they are actually married and Wilde addressed the rumors and said, “No, not technically, not if you checked the law books.” Sudeikis chimed in for a chuckle, “Or our moms.”

As for the future, future big brother Otis seems to be happily sort of taking on the sibling responsibilities.

“[He] loves little babies,” Wilde said to People last month. “He has a Michael Jordan doll that he carries around sometimes. [He uses the doll] as either a hammer or a baby.”

Take out the TV shows and glitz and glamour and their Hollywood love story is quite relatable — and with baby number two on its way, it's bound to get even cuter.