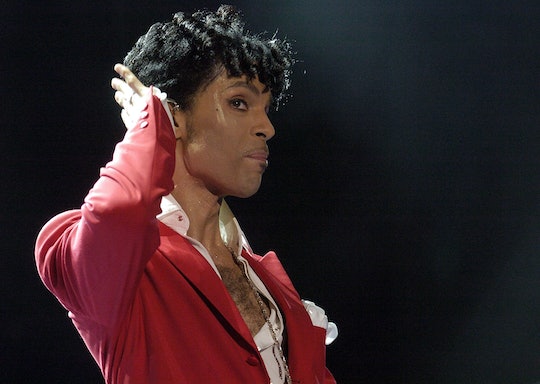 How Did Prince Get His Name? The Singer's Moniker Is Quite Musical

The world lost a musical legend with the passing of Prince. TMZ was the first to break the news that Prince died on April 21, leaving a hole in the hearts of fans around the world. As with the passing of any celebrity, Prince's death has lead to a number of questions about the 57-year-old singer's life and legacy from those who weren't necessarily fans. In addition to wondering what happened, people are curious how his career began, who he influenced, and how did Prince get his name.

OK, perhaps that last question is only designated for people who literally just heard of Prince today. (Yes, those people exist. Just check the Internet.) Although some his name stems from royalty, the moniker actually has a musical background. Born to a musician and jazz singer, Prince was named after the Prince Roger Trio, according to Biography.com. The site also noted that Prince's father John had performed with the group for a short time as a pianist. With a name that paying tribute to a band and parents who were clearly gifted, it's no wonder Prince turned into a musical icon.

Simple and sweet right? But anyone who is anyone knows there's more to Prince's name than a band.

As anyone alive in the '90s knows, Prince didn't always go by, well, Prince. In the early '90s, prince changed his name to an unpronounceable symbol. When he made appearances on television or was written about in publications, he was referred to as "The Artist Formerly Known As Prince." But why the change? Well, there are several stories behind that.

According to Rolling Stone, Prince's name change was a symbolic middle finger to his record company. At the time, the publication reported, Prince wanted out of his contract with them and thought changing his name to something unpronounceable would slow down record sales and cause the company to let go of him on their own accord. (It's worth noting that this theory was never confirmed by the artist himself.) Many others assumed that the name change was part of Prince's identity as a creative pop culture chameleon.

But if you asked Prince, it was merely an identity change that was necessary at the time. In a 1999 interview with Larry King, Prince revealed that change was a way for him to reinvent himself. As he told King:

I had searched deep within my heart and spirit, and I wanted to make a change and move to a new plateau in my life. And one of the ways in which I did that was to change my name. It sort of divorced me of the past and all the hangups that go along with it.

Prince eventually returned to his original moniker in the early 2000s, but still incorporated the symbol into he acts, whether it was as a mic stand or a backdrop on stage.

But his name doesn't matter — it never did. What mattered most about Prince was the music he created and the messages he sent through his songs, performances, and the way he lived his life. Whether you associate him with a symbol, song, or name, he will without a doubt be missed.