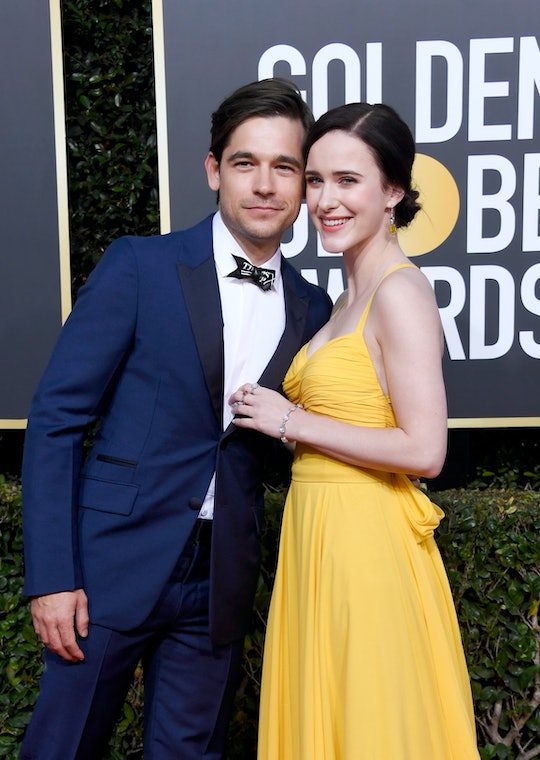 When Rachel Brosnahan accepted the award for Best Performance by an Actress in a Television Series (Musical or Comedy) at the 2019 Golden Globes, she thanked someone very special in her speech: her partner, Jason Ralph. But how did Rachel Brosnahan and Jason Ralph meet?

It was Brosnahan's second year taking home the Best Actress in a Comedy award at the Golden Globes; in both instances, she won for her starring role in Amazon Prime's The Marvelous Mrs. Maisel, which recently released its second season. But before she ever stepped onto the stage to perform stand-up as former housewife Midge Maisel, Brosnahan appeared on a show called Manhattan from 2014 to 2015. And that's where she met Ralph, according to PopSugar.

Manhattan was a fictionalized drama series on WGN America all about the very real Manhattan Project. It was set during WWII and followed the research and development of nuclear weapons. Brosnahan played Abby Isaacs, the wife of one of the scientists working on the Project. Ralph, meanwhile, played the role of Stan in six episodes of the two-season show. It seems he was on the show just long enough to be introduced to Brosnahan.

And it looks like Brosnahan and Ralph have been together ever since, though they're an especially private couple. The exact details of their very first meeting are unclear, and speculating about it would take things into fan fiction territory. They likely met while working together, though the circumstances haven't been shared with the public. In the intervening years, they've supported each other on red carpets and at award shows.

It's also not entirely clear whether they're dating or married. In September 2018, People reported that, according to an anonymous source, Brosnahan and Ralph had gotten hitched earlier in the year. However, neither of them has personally confirmed the news, either to People or on social media. The publication did point out that they both wear rings, but that doesn't necessarily mean anything. They could just like jewelry.

Brosnahan and Ralph don't often give each other shout outs on social media, but they have appeared on each other's Instagram accounts from time to time. Ralph made sure his followers knew exactly when the premiere of The Marvelous Mrs. Maisel was back in Season 1, and Brosnahan posted a photo of Ralph dressed up as Midge for Halloween this year. He nailed the look, though he did have insider info. They certainly seem supportive of each other, though they keep the details of their relationships under wraps from the public.

These days, Ralph stars on Syfy's The Magicians, which is about to enter its fourth season on Jan. 23. He also appeared on Younger on the Paramount Network. Brosnahan, of course, has found success with the show that brought her two Golden Globes and an Emmy for Lead Actress in a Comedy Series in 2018. And Ralph was in the audience to cheer her on every time.