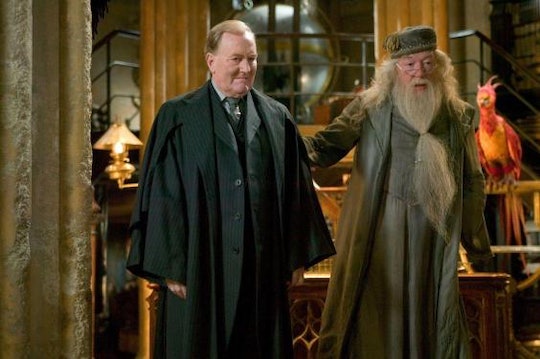 The actor best known to Harry Potter fans as Minister of Magic Cornelius Fudge passed away on Thursday night. Fans everywhere may be wondering how Robert Hardy died, but initial details are scarce, though his family has issued a statement confirming his death. Per the Evening Standard, his children Emma, Justine, and Paul said:

Dad is also remembered as a meticulous linguist, a fine artist, a lover of music and a champion of literature, as well as a highly respected historian, and a leading specialist on the longbow. He was an essential part of the team that raised the great Tudor warship The Mary Rose.

Gruff, elegant, twinkly, and always dignified, he is celebrated by all who knew him and loved him, and everyone who enjoyed his work.

We are immensely grateful to the team at Denville Hall for the tender care they gave during his last weeks.

Denville Hall is a London retirement home that caters to professional actors. Hardy was 91 years old at the time of his death. His prolific career spanned several decades, during which he appeared in the BBC serial David Copperfield, 1965's The Spy Who Came in From the Cold, and the long-running series All Creatures Great and Small.

A BBC obituary of Hardy notes that he "became something of a specialist in the role of Sir Winston Churchill," having portrayed the British Prime Minister in three TV movies, two miniseries, and an episode of Agatha Christie's Marple. He was close with his Spy Who Came in From the Cold costar, the late Richard Burton. The pair met while studying at Oxford University, and later served together in the Royal Air Force before breaking into show business. In 2015, Hardy told the Telegraph's Harry Wallop that the two "loathed each other" when they first met: "He thought I was upper class and spoilt and all that. And I thought he was presumptuous and tiresome." Eventually, though, they bonded over their shared interest in theater.

In addition to his acting career, Hardy published two books on medieval military archery, and was, as his children's statement mentioned, an integral consultant charged with restoring bows recovered from the Mary Rose, Henry VIII's sunken warship. But for many, his Harry Potter role will remain his greatest legacy. "I loved my time as Cornelius Fudge," Hardy told the Daily Mail in 2009. "It was such fun to film, and there were so many laughs on set that it was hard to come up with a sober face just before they shouted, 'Action!'" His only regret was that the part wasn't meatier, as much of the source material had to be cut short. Fudge was a tragically inept and often jealous leader, but Hardy managed to portray him as a sympathetic, and even charming man. He'll be missed.