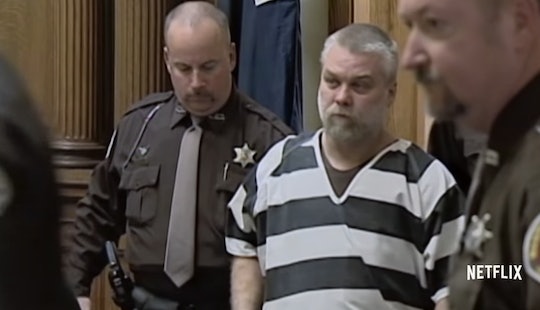 How Did Steven Avery Meet His Girlfriend? The Two Had An Unconventional Love Story

The country's most-discussed prisoner seemingly made a love connection behind bars. Aside from the lurid details of his sordid case, many fans of the Netflix docu-drama people are busy wondering exactly how Steven Avery met his girlfriend? According to The Daily Mail, Sandra Greenman was a big fan before she was his fiancée, which makes the whole thing that much more interesting.

In an exclusive interview with the newspaper this week, Greenman revealed that she and then-husband Wallace watched Avery's 2007 trial on TV. At the time, she was working as a phlebotomist and found herself completely engrossed in the story. She said that she and her husband both believed Avery was innocent. In the interview, she stated,

He [Avery] had been in prison for 18 years for something he didn't do. He lost his family because of that - he had five kids including a stepson. ... Then he got out of prison and he was in line to get millions of dollars from his lawsuit.

His life was back on track, he was engaged to get married. Why would he do something like that (kill Teresa Halbach)? ... And after I met the man, I knew there was no way it could be true.

Apparently at Wallace's urging, Greenman wrote to Avery, sent a letter to the judge, and visited prison (Wallace was too sick to go himself). Despite her fear of meeting Avery, Greenman did eventually connect with him. She described their first meeting with affection. "We had three hours of solid conversation," she told The Mail. "It was like I had known him for 100 years. We found that we liked a lot of the same things and the time went really fast, so I went back [and] he turned out to be my best friend."

According to Greenman, the 73-year-old was at one point able to ask Avery directly whether he'd killed photographer Teresa Halbach, but he told her he hadn't done it. She said that she believed him.

Although the two did develop a deep relationship as time progressed — eventually beginning a romantic relationship after Greenman's husband passed away — Greenman and Avery's subsequent engagement ended as quickly as it started. Greenman explained that she broke it off when he refused to convert to Christianity.

Though Greenman said she continues to offer her support to Avery, but that she was not sure what their future held:

Since we broke off the engagement, I've visited him less and less. It's too hard for me. I still love him and want the best for him. I want him out. He calls any time he can and he says I'm being stubborn. But we will see what happens. It's a friendship right now. I don't know how it's going to end and if he gets out, it's a whole different story.

Avery is the subject of the tangled Netflix series, Making a Murderer. After spending 18 years in prison for a crime he didn't commit, Avery prepared a multimillion-dollar lawsuit against the county before being convicted of murder and sentenced to life in prison. Amateur sleuths wonder whether Avery actually murdered Teresa Halbach or whether he was framed. Though Greenman has a unique relationship to Avery, she is firmly of the belief that he didn't do it.