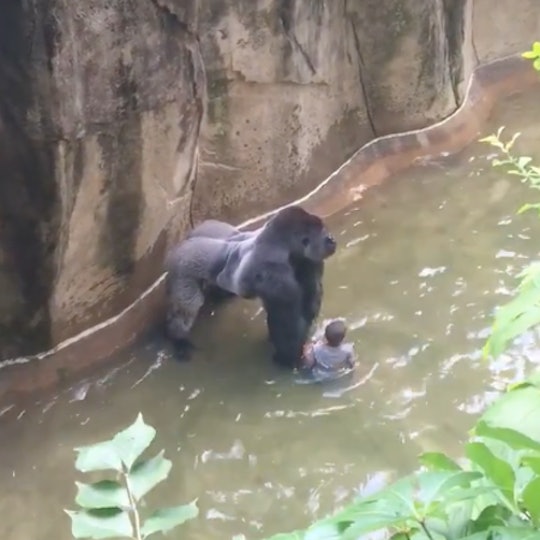 How Did The Child Get Into The Gorilla Enclosure At The Cincinnati Zoo? He Was Determined

On Saturday, a 4-year-old boy was hospitalized with serious injuries and a gorilla was shot dead after the young boy fell into an exhibit at the Cincinnati Zoo. And while the entire event was a tragedy and an accident, many are still looking for someone to blame: many people are asking, where were this young boy's parents? How did the child get into a gorilla enclosure in the first place?

According to Zoo Director Thane Maynard, the boy crawled through a stainless steel barrier and approximately four feet of bushes before falling into the exhibit. While two of the gorillas in the enclosure retreated — as they were instructed to do by zookeepers — Harambe, a 17-year-old silverback, did not. Instead, he carried the child for more than 10 minutes before the zoo's dangerous animal response team killed Harambe with a single shot.

While the extent of the boy's injuries remains unclear, he was released from the Cincinnati Hospital Medical Center Saturday night, and the boy's family stated he is "doing just fine," according to a statement released by the Gail Myers Public Relations LLC:

We extend our heartfelt thanks for the quick action by the Cincinnati Zoo staff. We know that this was a very difficult decision for them, and that they are grieving the loss of their gorilla.

As to the former question — who is to blame — the answer remains unclear, but I think that is because the answer is no one. No one is to blame because this was an accident, and accidents happen, especially with 4-year-old children. Toddlers are small, sneaky, fast, and fearless.

And I would know because just a few months ago my own daughter had "an accident." In the 30 seconds it took me to use the bathroom, my daughter ran away and onto our bed. In the time it took me to pee, wipe, and flush, she managed to fall and crack her head open. She managed to acquire a gash deep enough and long enough that it required a trip to the ER, one CT-scan, an entire trauma team, and three stitches. But she didn’t get hurt because I was negligent, inattentive, or a bad parent — it happened because it was an accident, and accidents happen to the best of us.

Parents who are thinking of attacking the parents of the toddler who fell into the enclosure should be the last to jump to criticism, because accidents of this nature are totally unpredictable.