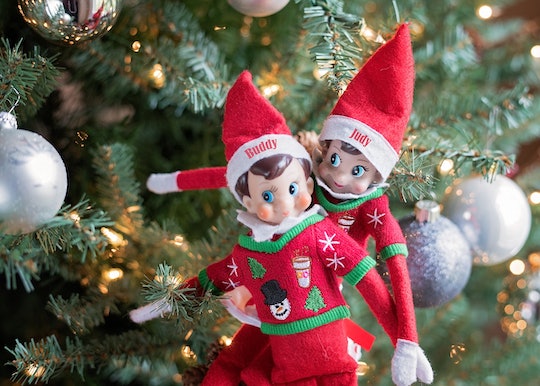 This Is How The Elf Of The Shelf Meme Got Started, If You're Dying To Know

As with any Christmas-themed tradition, Elf on the Shelf is basically another form of decorating that parents are forced to take on to please their kids for the holiday. Just kidding, mostly. They also have the hope that the presence of the scout elf will inspire the kids to make make nicer, not naughtier, decisions leading up to the holiday, since the elf reports back to Santa every night. And as with any popular topic on the internet, it wasn't long before elf-related memes took over our feeds. But how did the Elf on the Shelf meme start? As with anything, people will find a way to poke fun at things that they love and hate.

According to Metro news, the rhyme from the name "Elf on the Shelf" caught the attention of meme lovers on the internet. It might take a minute to decode exactly what some of the infamous memes mean, but once you recognize that it all comes down to the rhyme, there's no stopping the laughter and awesomeness that ensues.

It began sometime around last year. The meme generally starts with the question "You’ve heard of Elf on the Shelf?" What follows is a photo that represents two things that rhyme, with one object typically superimposed onto another object, like Shrek on a deck. And where else would this sort of meme-fantasy start except on Tumblr?According to Polygon, the very first post like this was shared with the aforementioned caption along with a photo of Ash Ketchum (from Pokemon) in a trash can, or in other words: Ash in the Trash.

Subtle yet epic, I know. Because it opened the door to a whole new world of possibilities and play on rhymes, the meme idea can't be all ridiculous, right? Regardless, the humor potential is through the roof, and no one is going to judge you if you spend the rest of your day sifting through the Twitter or Tumblr universe for the rest of today trying to decode all the elf on the shelf memes you dig up.

Up until around this September though, surprisingly, the meme stayed pretty laid back. Once fall arrived and families started stocking up on ideas and elves, nevermore. The hilarious meme has exploded and there is no sign of it being contained any time soon. The trend has gotten political, sexual, unforgiving, and pretty epic on so many accounts — the below post being just one great example that refers to current events.

I mean, you can't help but to laugh at Bannon on a cannon, right?

And how about my personal favorite, pug in a rug?

Of course you can bring this elf on a shelf meme to life with Yeti in my Spaghetti. It's an actual yeti figurine that you can garnish your child's (or your own — no judgements here!) spaghetti with. It's a whole new concept of playing with your food, that's for sure. And the kids will think it's gold.

As you can see, the meme has taken on a life of it's own, and it's obvious that they cater to parents more than the kids, so if there is anything that the elf on the shelf has given us, other than another thing to stress out about, its these hilarious memes.

Whether you participate in moving the elf actual elf in your house every night or not, you can still enjoy the memes from afar. In fact, it's a great way to blow off some steam when you're feeling overwhelmed, stressed, and antsy for the Christmas craze to pass — think of decoding these memes as the modern day crossword puzzle.

In the meantime, here's another meme for the road...