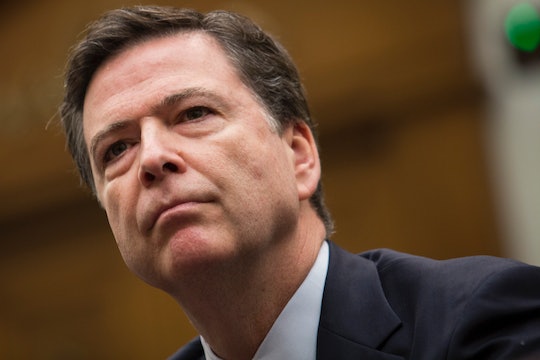 How Did The FBI Read All Of The New Clinton Emails In A Week? There's An App For That

It's officially less than 24 hours until the patriotic dumpster fire that has turned out to be this year's presidential election. I'm fairly confident this election has basically put a run on stocks in tin foil hat futures, because I genuinely can't keep up with the conspiracy theories making their internet rounds at the moment. But is it really surprising? GOP candidate Donald Trump has run his campaign on a platform of fear-mongering bordering on the paranoid — everything a good conspiracy theory needs to propagate. The latest conspiracy du jour: How did the FBI read all of the new Clinton emails in a week?

If you've been living off the grid or simply hiding and rocking in a fetal position until this election is finally over, this all goes back to FBI Director James Comey's letter to Congress informing various committee chairs that his agency had discovered more emails pertinent to Democratic candidate Hillary Clinton's personal email server from when she served as Secretary of State. In July, Comey ultimately recommended that the Department of Justice should not seek criminal charges against her. These newest emails were found in the course of a current FBI investigation into former Sen. Anthony "Carlos Danger" Weiner. After reviewing this latest trove of emails — 650,000 to be precise — the FBI again had found no evidence of criminal activity on Clinton's part.

As some conspiracy theorists would argue, the FBI couldn't possibly review that many emails in just a week — wake up, sheeple! When the news of the new Clinton emails first broke, many analysts originally speculated that Clinton's email review would take weeks. Well, the fact of the matter is that the FBI's email review didn't take weeks after all — and here's how.

First, there seems to be some misconception about how the FBI could work through their review in such a short period of time, as if perhaps Comey and his team killed several printers in the process of trying to print out 650,000 pages of emails, and then reading each printed page individually.

Yeah, no — not so much. According to Wired, who spoke with forensics expert Jonathan Zdziarski, scanning hundreds of thousands of emails for pertinent information is as simple as using basic filter and search queries, just like you would in your own inbox. "This is not rocket science," said Zdziarski. All 650,000 emails were found on Weiner's laptop, and according to The New York Times, many of the newly discovered Clinton emails were duplicates. The first step would be to narrow those thousands of emails down to those that are most likely to be relevant — searching and filtering by To, From, and Cc fields could isolating emails to and from Clinton. Analysts could then filter for certain keywords pertinent to their investigation. Still, those basic filters and searches could yield a substantial number of emails to review, so the FBI would need to up its investigative ante.

Using computer programs to match and compare everything from each unique email message ID to specific chunks of text allows analysts to whittle down those emails even further: Forensic software like EnCase or AccessData Forensics Tool Kit are two such computer programs that accomplish more complicated digital forensics tasks, as would be required of a cache of emails this large. This would allow analysts to discard irrelevant emails, like Clinton campaign chair John Podesta's risotto recipe. (The FBI National Press Office did not immediately respond to Romper's request for comment regarding exactly what methods were used to examine Clinton's emails.)

According to ex-CIA worker and digital privacy advocate Edward Snowden, the entire process of chipping down 650,000 emails into only those most relevant wouldn't take that long at all. On Sunday, Snowden tweeted, "Old laptops could do it in minutes-to-hours." Zdziarski himself joked on Twitter about how sorting through that many emails isn't that complicated with the help of forensic software.

Or, more simply, as one Twitter user put it:

Look, this isn't some "Hack the planet!" conspiracy. If anything, tin foil hats go both ways, as some Democrats have argued that Comey may have violated the Hatch Act by even telling Congress about the new emails in the first place: His actions could be construed as trying to influence the outcome of the election. Unfortunately, these new Clinton emails and second exoneration of criminal wrongdoing aren't going to sway either party base. For Dems, this reinforces their belief that the Clinton email scandal is a distraction seized upon by Republicans while Trump's most die-hard supporters see this as another example of how the election is "rigged" against Trump.

T-minus 24 hours and counting until the insanity that is the 2016 election is over, folks.