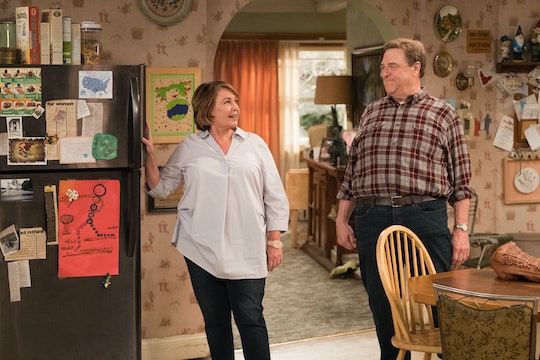 Here's How The Original 'Roseanne' Ended, For Those Who Need A Refresher

When dedicated fans of Roseanne heard about the upcoming reboot coming out on March 27, there was a general feeling of excitement because, even though the show ran for nine seasons, it was still one of the more classic '90s sitcoms. But with the reboot comes a ton of questions since it's no big secret that the ending of the series in 1997 changed things up a bit. So how did the original Roseanne end? There are probably going to be some big differences in the reboot, but chances are, they’ll be addressed early on or feel natural enough to not take you out of the show.

The final season garnered some negative feedback from critics and fans alike because a big part of the show, the Conner’s poverty, was completely changed when they won the lottery. Part of the charm of the blue collar family was that, throughout the series, they represented a class of people not often seen on sitcoms or not correctly depicted. With the Conners, you had an unapologetic family who seemed to still stick together despite money and family problems that seemed so real for some viewers. Personally, I loved living vicariously through the family, seeing their sudden wealth and how they went about spending money and changing their lives in a way that any working class family would.

But in the series finale, Roseanne sort of wiped that fantasy clean and revealed that there was a lot about the show that wasn't "real," so to speak.

In the final 10 minutes of the episode, Roseanne and her family and closest friends were seen eating dinner while she reflected on each of them and revealed that she’d been working on a memoir since Dan’s heart attack the previous season and had changed each of them in it. According to the finale, much of the events after Dan's heart attack were from a memoir she'd been writing and she’d taken some creative liberties. "I began writing about having all the money in the world," Roseanne said in a voice-over and she explained that she rewrote her life, or the majority of what viewers saw in the entire series.

Instead of surviving his heart attack and eventually having an affair, Dan actually died. And while Darlene and David and Becky and Mark were each married in the show, in Roseanne's "reality," the couples were swapped. And according to the ending, Jackie is actually a lesbian in "real life" instead of the straight woman Roseanne wrote her to be.

Admittedly, although it reversed the lottery storyline and fortune the Conners had won in Season 9, the finale did make things sort of confusing, especially since the Roseanne reboot further complicates things. But it looks like it will completely erase and ignore the events of the final season, at least for the most part. In the previews for the nine-episode reboot, Dan is alive and well instead of succumbing to his heart attack and the Conners are definitely not swimming in more than $100 million of lottery winnings.

However, Harris, Darlene and David’s daughter who was born prematurely in the final season of the show, does exist in the reboot, so there are likely some creative liberties that were taken. But overall, it's safe to say that Roseanne’s epilogue in the original Roseanne finale and much of the events of Season 9 aren’t going to play a role in the reboot.

Back in August 2017, ABC Entertainment president Channing Dungey talked about the show’s revival at a Television Critics Association event and confirmed that "Dan is very much alive" even though the idea isn't to ignore everything about the series finale. And in another recently released preview for the reboot, Darlene and David have a scene together in which he’s looking at her childhood bedroom in the Conner home, so it's safe to say that they still were the ones who ended up together, as opposed to her would-be relationship with Mark, as teased in Roseanne’s voiceover in the original finale.

Even if you totally loved the way things ended for the original Roseanne, you can’t really hate on it now, since it seems like it's going to be more of the same current humor and relatable antics. I can't wait.