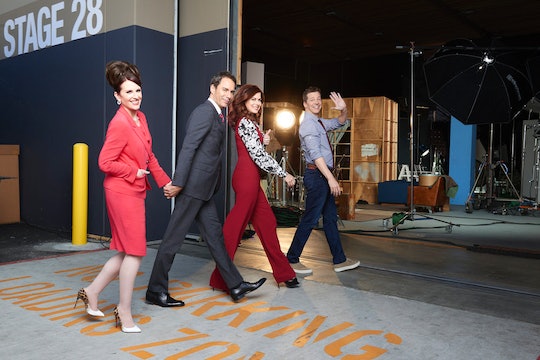 The Original 'Will & Grace' Finale Left Many Fans Disappointed

The highly-anticipated continuation of Will & Grace has a tall order to tackle right off the bat. The former series finale was a controversial one that was far from beloved by fans, which was part of the reason why a new season seemed so appealing. But how did the original Will & Grace finale end? And why did fans dislike it so intensely?

The entirety of Season 8 was tough to watch. After breaking up with her cheating husband Leo, Grace discovered that she was pregnant. She decided she wanted to raise the baby with her bestie Will, which put a wrench in Will's future with his boyfriend Vince. However, when Grace decided to reunite with Leo instead, it destroyed her relationship with Will. They barely spoke to each other for nearly 20 years, drifting apart further as they raised their own families. Grace and Leo had a daughter named Laila; Will and Vince had a son named Ben. Will and Grace didn't reconcile until their children crossed paths at college, mirroring the way Will and Grace had first met. Eventually, Laila and Ben got married. Meanwhile, Jack and Karen decided to be platonic soulmates with their roles reversed: Jack became suddenly wealthy and Karen didn't have a dime to her name.

The friendship between the titular characters was the foundation upon which the entire series was based, so seeing them drift apart was heartbreaking. A last minute reconciliation didn't erase the disappointment, either. Luckily, the revival has figured out how to handle the situation in a way viewers might appreciate.

They'll be ignoring the original finale. Series co-creators and executive producers Max Mutchnick and David Kohan explained to Entertainment Weekly that they just weren't interested in exploring the possibilities opened by the finale. Back when they assumed the show wouldn't be returning, it was much easier to put a finite finish on everything. To stay true to the heart of the show while creating new content, the revival would have to go a different way. They wanted the show to be the best version of itself and honor the things that made it great in the first place, so in the revival Will and Grace will once again be single pals living in the same apartment.

"When the decision was made to bring the series back, we were like, well, we left them with kids, right?" said Kohan. "And if they have children, then it has to be about them being parents, 'cause presumably it would be a priority in their lives. And if it wasn't a priority in their lives, then they're still parents, they're just bad parents, right? We frankly did not want to see them being either good parents or bad parents. We wanted them to be Will and Grace."

Everything will be just like you remember it from the earliest days of the show. Grace will be an interior designer and Will a lawyer. Jack will take up residence in Will's building again while he tries to teach young actors the art of "Jackting." Karen remains the mistress of her large mansion, though Rosario won't be there to join her anymore. Actress Shelley Morrison has retired from acting, so Karen may need to hire some new help.

Though the new episodes will be ignoring the Season 8 finale, it won't necessarily be erasing the relationships Will and Grace were in at the time. It's been reported that Grace's ex-husband Leo will be making an appearance again, as will Will's partner Vince. It's unclear if the couples will still be together, however. Debra Messing told TVGuide that she was eager to see Grace dating again, and it does seem like both she and Will are going to be single in the new episodes. (Sorry, Vince! Not sorry, Leo!)

The Will & Grace revival may be nixing the original, unsatisfying finale but that doesn't necessarily mean it will be the same old show again. There will still be some changes, though hopefully they're changes the audience will enjoy.