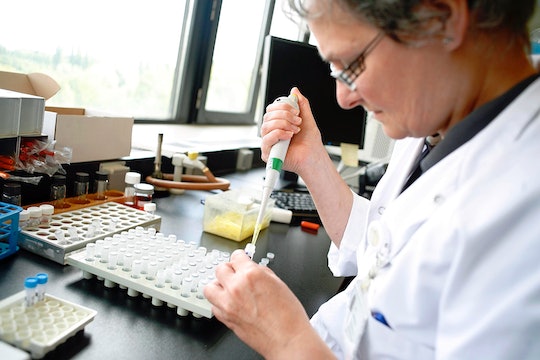 How Did The Superbug Infect Someone? Antibiotic Resistance Is A Threat

Antibiotic-resistant bacteria poses a serious health risk; for years, medical professionals warned about the dangers of overusing antibiotics. The threat didn't feel quite so real until now: in April, doctors diagnosed the first United States-based infection that doesn't respond to the strongest available antibiotics. How did the superbug infect a Pennsylvania woman? It's unclear what precisely led to her illness, but scientists do believe they understand how the bacteria made the jump to humans.

The origin of the woman's infection is currently unknown, according to The Washington Post. The Centers for Disease Control and Prevention is leading the investigation, working with the woman, her family, and her associates to source the exposure and detect any spread. Dr. Yohei Doi of the University of Pittsburgh told The Washington Post that since Chinese farmers often give Colistin to farm animals, it's possible the resistance started there. When humans eat meat containing the antibiotic-resistant microbes, it's possible for them to contract it, too. Unfortunately, researchers just found the bacteria in United States livestock, CNN reported: a pig intestine tested positive.

At first, the infected woman appeared to have a urinary tract infection, according to Penn Live. When doctors tested her urine, they discovered mcr-1 in the sample. A form of E-coli, mcr-1 doesn't respond to colistin, an antibiotic generally reserved for worst-case scenarios. Other antibiotics that can be used to treat mcr-1 exist, Philly.com reported; in this case, infection wasn't a death sentence. The danger is in the potential for the mcr-1 bacteria to assist other bacteria in developing colistin resistance. CDC director Tom Frieden said that such a development could mean "the end of the road" for antibiotics, possibly resulting in increasing numbers of unanswerable infections. Some scientists see the widespread antibiotic resistance as an inevitability, prompting Frieden to call for new drugs, according to CNN. In a foreboding statement, he said, "The medicine cabinet is empty for some patients. It is the end of the road unless we act urgently."

For now, medical professionals urge people not to panic. Dr. Neil Fishman of the University of Pennsylvania Health System told the Pittsburgh Post-Gazette that the emergence of antibiotic-resistant bacteria is dangerous but "not a death star." As researchers work on developing new drugs, it's essential for doctors to cut down on unnecessary antibiotic prescriptions. Mcr-1 may not be reason for immediate public concern, but many doctors agree that it's essential for the international medical community to rapidly pursue a solution to the worst-case scenario: the spread of a truly unbeatable superbug.