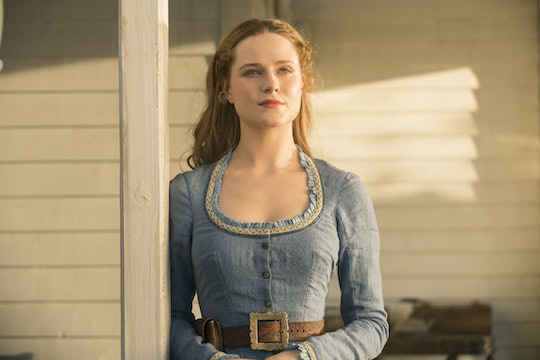 Here's Everything That Happened In The 'Westworld' Season 1 Finale

The first season of Westworld told a complicated story that moved back and forth through time until it reached its shocking conclusion. The events of the finale will have repercussions for the show's future, and fans might find the park greatly changed when the show returns on April 22. But viewers who need a little refresher might be wondering: how did Westworld Season 1 end? There were a lot of developments that the audience ought to keep in mind ahead of the second season so they can better follow everything that unfolds.

"The Bicameral Mind" was full of revelations. It saw the Man in Black realize, after being told more than once, that the maze he sought was not for him. The maze was actually a test development by Arnold to prove that Dolores had reached true sentience. Flashbacks revealed that Arnold regarded Dolores as his child after his own biological son died, and he became consumed with the need to save her and the other hosts from the horrors they would experience in the park. Not only would they be subjected to terrible violence, but also constant rebooting that kept them just on the cusp of self-awareness without ever letting them cross over. He tried to keep the park from opening by using Dolores to stage a massacre of hosts that ended with the one killing that couldn't be undone: his own.

This didn't end up preventing the park's opening, nor did it prove that Dolores had evolved enough to be considered in control of herself. She was still acting under Arnold's orders and it would take decades before she could finally understand herself, which she did in the Season 1 finale. She began to listen to her own inner voice and follow her own desires instead of her programming. And her desires were revolutionary.

A showdown with the Man in Black (who was actually Dolores' lover William from years prior) resulted in Dolores being stabbed. She was rescued by Teddy, who brought her to the ocean for a tearful death scene that was merely the final scene in Ford's new narrative for the park — or so it seemed. He had assembled the Delos board and all the investors to get a look at his last storyline before his retirement, but it wasn't the saccharine seaside goodbye they thought it was at first.

Ford had finally come to the same realization Arnold had about the hosts, and he'd been nudging them towards taking action against the humans all season long. He planted the seed, but Dolores ultimately decided of her own free will to pick up the gun she'd used to kill Arnold and kill Ford during his big speech. Then she turned her gun on the guests. The robots of Westworld decided to rise up against the humans after endless abuse at their hands.

Meanwhile, Maeve was having her own realizations. After reviving an injured Bernard, she learned that her independence had actually been manipulated; someone (most likely Ford) had programmed her to enlist other hosts in an effort to break out of the park. She decided to go along with the plan anyway, using Hector, Armistice, and Felix (the only decent human left in the world, apparently) to get out of Westworld. She made it to the train platform eventually, leaving a trail of dead technicians, guards, and hosts in her wake.

However, seeing a mother and daughter on the train reminded her of the child she'd had in a past narrative. Maeve had been desperate to find her daughter throughout Season 1, but prized her own independence over that goal — which turned out to be something she was designed to do. Instead of taking the train out of town, she bucked her programming just like Dolores and chose to stay behind so she could find her child.

The hosts asserting their control over the park in the Westworld Season 1 finale altered the status quo, so Season 2 will find its characters dealing with a different world entirely. And there's no predicting what turns it will take until it gets here.