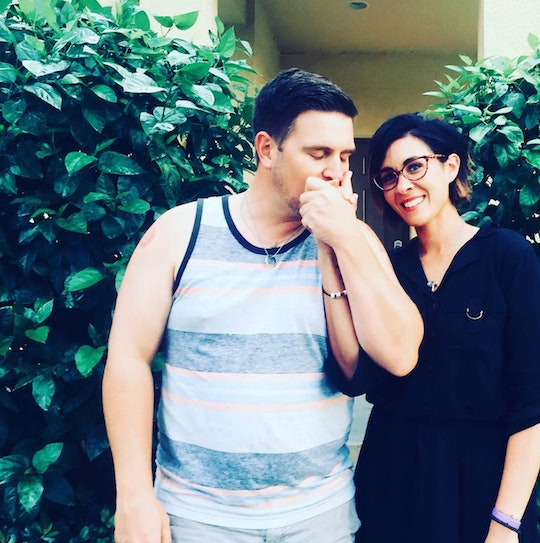 How Divorce Actually Saved Our Marriage

After spending over 13 years together as friends, lovers, and parents, my husband and I realized that our relationship was broken. It's not easy to admit your marriage has tanked, but I truly believe that's the only way you can go about fixing something that's cracked and tattered and bleeding. And so, with tears in my eyes and a lump in my throat, I discussed leaving. Thankfully, divorce actually saved our marriage. I just didn't know it yet. That realization would come much, much later.

The American Psychological Association states that 40-50 percent of marriages end in divorce, with any subsequent marriages facing even higher rates of separation. When my husband and I first met, I'd just come out of a four year marriage that started out as a high school relationship. My first marriage, however immature and ill-fated, taught me what I wanted in future relationships, and, perhaps even more importantly, what I didn't. My first husband and I parted amicably, and started walking down separate paths. My path, of course, eventually lead me to my now-husband. Still, I was young and unsure of my future, in need of a little more growth and independence and fully aware that I would have to spend some time alone in order to do so. I wasn't in any way ready for another commitment. I did, however, feel an undeniable need for some semblance of security. So, after meeting my now-husband, I found myself rushing into a relationship like waves crashing against the sand.

We haven't looked back, since. Well, until now.

The issues that continue to challenge us today, it turns out, started pretty early on in our relationship. Open lines of communication were non-existent, and we struggled to figure out how to make us work, seemingly against all odds. He was an only child who'd been on the receiving end of almost everything he ever wanted, and his parents seemed to have a happy, healthy marriage. Then he entered high school, and the problems his parents were facing within their relationship became obvious. The complications he'd witnessed as an impressionable high schooler taught him to shut down emotionally when it mattered most. I was the oldest of two children, and after my parents' divorce, fought poverty, abusive situations, and traumas I'm still not healed from.

In other words, we both had pasts that would dictate the future we were planning to spend together. A future that was already in danger of disappearing at the very beginning of our relationship.

The issues that continue to challenge us today, it turns out, started pretty early on in our relationship.

The instant we met, we were yin and yang, though oddly connected in ways I simply cannot connect with anyone else. But our differences — and there are many — threatened our relationship significantly. We knew it would be easier to go our separate ways than fight for the future we had initially envisioned. But when I found out I was pregnant with our daughter we forged on the best we could and regardless of however challenging the road ahead would be.

My husband and I didn't get married until our daughter was 1-year-old. He wasn't ready, and while I said I was ready at the time, now I realize I wasn't ready for marriage, either. That entire first year as a new mom I had debilitating postpartum depression (PPD), and it undoubtably impacted our relationship. My mental health declined and everything around me — especially my marriage — felt hopeless.

But through miscarriages, infertility, and the birth of my second child that nearly took my life and the life of my infant son, my husband and I held on. Over and over again, we'd re-visit the same conversations about our lack of communication, our inability to truly hear one another, and our lack of unity. It was a broken record, or at least one on repeat. We'd be OK, for a while, and then it would begin again. We just couldn't find our way, and it was exhausting.

But our differences — and there are many — remind us of all the times when ending our relationship would probably be significantly easier than fighting for it.

Fast forward to the present. Our kids just turned 11 and 6 years old, and after a traumatizing out-of-state move, my relationship isn't the only thing that suffered. I lost work hours, together we lost alone time, and both kids have had a terrible time adjusting to their giant new school where each have had incidents with other students. They cry a lot, and wonder why we've done this to them. Beyond all of that, my mental health was yet again on a downhill slope.

I still remember all the things my husband and I had to tell our kids to get them on board with the idea of moving from a small town in Ohio to a big city in Florida. Now I see that we, well, lied. This "new life" wasn't going to fix anything. My marriage wasn't going to magically improve with the change of a zip code. We wouldn't have everything we wanted that our relationship was lacking if we packed up our stuff and moved it all to another state. Heartbroken, feeling alone, and acutely aware of the problems in my marriage, I no longer had it in me to fight. I was ready to wave the white flag. I was done.

... but first time in the 13 years it finally feels like my husband and I are standing on common ground.

When I brought up the possibility of divorce, I'd reflected on what it might mean for the two of us and our children. I thought long and hard about the reality of it all and how it would change the lives involved. Talk of divorce felt a little too natural, too, which means it's something we should've done a long time before this move forced the worst out of us.

After we discussed leaving and going our separate ways and ending our marriage, I actually felt lighter and more hopeful. All my feelings were right there on the table, and it made me realize my marriage can't survive without hard discussions like this and, if anything, maybe our willingness to do everything to avoid "the talk" is why my husband and I have struggled for so long. It was the elephant in the room, forever between us and making it impossible for us to connect.

Marriage is hard and weird and complicated. You have to work on being the best whole person you can be first and foremost, then give your relationship all you can give it. It took me a long time to learn that lesson, to be sure, but for the first time in the 13 years it finally feels like my husband and I are standing on common ground. It doesn't mean marriage will be easy moving forward and, for us, it's a choice we'll have to make every single day. I know I wouldn't want to go through any of it with anyone else, though, and now I know my husband feels the same. I suppose that's what marriage is.