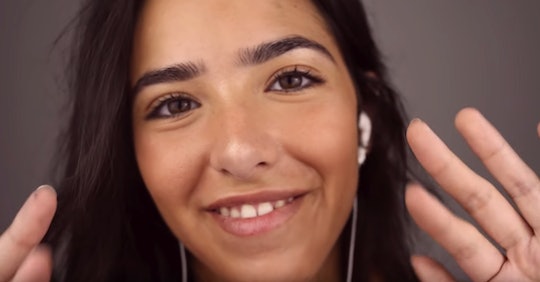 Here’s What ASMR Videos Actually Do To Your Brain, & It's Kind Of Freaky

Some of the most popular YouTube vids feature people whispering, scratching the microphone, or playing with bubble wrap. It's the world of ASMR videos, and it's a category of YouTube vids like nothing else. Understanding what ASMR videos actually do to your brain will help explain the intense popularity of these simple vids. There's a reason why some people really, really enjoy the sound of a stranger whispering into a microphone.

Known as autonomous sensory meridian response (ASMR) videos, these popular vids showcase people whispering, tapping, fluttering fingers, smacking lips, and otherwise making all sorts of quiet sounds, as explained in HuffPost. Why would anyone watch a video of someone eating pickles or tapping on a book? Basically, these vids make some people feel amazing. When listening to ASMR vids, some people experience feelings described as tingles, goosebumps, or frisson, and they often result in sensations of relaxation and calmness, as explained by ASMR University. Not everyone experiences these feelings, however, and some people even have the opposite reaction to these common ASMR triggers, as noted in WBUR. (I'm pretty weirded out by the eating and lip smacking ASMR videos, honestly, to the point where I can't watch them. But obviously other people love them.) So what's actually going on in the brain of people who enjoy ASMR vids and experience these magical brain tingles?

Although the world of ASMR study is still new, researchers have already made some interesting finds. One potential explanation involves mirror neurons, which are brain cells that respond the same way to actions people witness and actions that people perform themselves, as explained by the American Psychological Association. If you cringe in sympathy pain when someone else bangs their elbow against a doorframe, then this is an example of mirror neurons at work. It's an empathetic response that makes other peoples' pain (or joy or fear) your own.

So when some people watch ASMR videos, these neurons might help recreate the experience in their own brain. "Just like when you wince when you see someone cut their finger, viewers of ASMR videos may be mirroring the relaxation being simulated in the video," said Craig Richard, professor in the Department of Biopharmaceutical Sciences at Virginia’s Shenandoah University, in Scientific American. In other words, when someone watches an ASMR video about scalp massage, then the viewer's own brain might react as though they're the one getting pampered. Mirror neurons are pretty cool, in other words.

Interestingly, the brain tingles associated with ASMR may also be measurable in some ways. In fact, people positively triggered by ASMR videos were found to have "increased skin conductance levels" while watching the content, as a recent study in PLOS One determined. So although the exact ways ASMR videos affect the brain are not totally understood, there's definitely a real, measurable physiological response going on for some people. It will be interesting to see where this research goes in the future, and whether we'll fully understand the reason behind those brain tingles that ASMR video fans love so much.

More Like This
17 Pictures Of Positive Covid Test Results
Here’s How To Keep Your Baby Safe When Their Older Sibling Is Sick
Can Elderberry Help Prevent Illness In Kids? Doctors Weigh In
Endometriosis & Your Sex Life