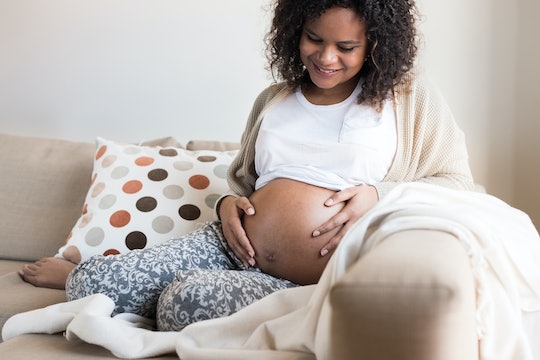 When I was pregnant with their little brother, my boys would daily assault me with an endless stream of questions. Some were cuter: "How does he eat in there?" While others had me rolling my eyes: "Does he poop inside of you?" But all were actually pretty valid and I more or less felt capable of answering them accurately. Until one day when my 7-year-old asked if the baby could breathe inside my tummy. Cue the sudden realization that I, the legit grownup, actually had no idea. How do babies get oxygen in the womb? Mommy doesn't know, kids. Luckily, there are some experts who do.

Babies don't exactly breathe oxygen in the womb, at least not in the sense that we understand breath, but they do receive oxygen from the mother. Rebecca Lee, a Registered Nurse in NYC and founder of RemediesforMe.com, explains that when the mother breathes, oxygen is passed from the placenta to the umbilical cord and on to the baby via the bloodstream.

If your baby isn't actually breathing, why does it look so much like he is when you have an ultrasound? Certified Nurse Midwife Katie Page tells Romper, "In the womb, we can see 'breathing' of babies by increase and decrease in the spaces between the ribs." Page says that rather than the lungs actually filling with air, this practice breathing is the chest wall expanding and contracting and the muscles working. Babies don't breathe in the womb, but they sure are committed to practicing.

So when does all this practice begin? You'd think it would be towards the end of the third trimester, right? Believe it or not, practice breaths starts as early as nine weeks gestation when, according to Lee, the baby begins to mimic breathing-like movements. Only a week or two later, before the first trimester has ended, she begins to inhale small amounts of amniotic fluid that mimic swallowing. These skills help her little lungs develop properly (and amaze her very excited mom and dad when they find out).

As the weeks of gestation go on, a baby's practice becomes all the more intricate. By 32 weeks she will be making more advanced breathing movements involving compressions and lung expansion, Lee explains, and by 36 weeks her lungs are considered fully mature and ready for life outside the womb (although health professionals all agree that it's safest to let her reach 39 weeks).

Page, who is clearly passionate about her midwifery practice, describes a fetus preparing to take her first breath as a fascinating process. "Physiology is so neat," she exclaims. "When a baby is born they are stimulated to breathe via pressure on the chest wall through the birth canal and the sudden release of pressure when they come earth side." Page adds that the change in temperature and surrounding environment, in conjunction with the stimulation of being touched for the first time, triggers the instinct to take her first breath and fill her lungs with air.

I wish I had known about the ins and outs of fetal "breathing" while still pregnant with my little guy a few months ago. Not only could I have patted myself on the back for knowing the answer to yet another one of my minions' questions, but I could have taken credit for another miraculous part of growing a human being: Supplying him oxygen. Like a boss.

As a parent there is nothing quite like witnessing your child take the very first breath of his life. Somehow it's made even a little sweeter knowing that he was practicing for it all along.