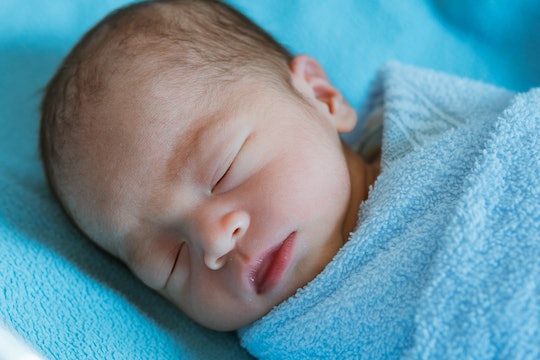 This Is Exactly How Baby Boxes Prevent SIDS, According To Pediatricians

Safe sleep for infants is one of the most important things you'll learn about as a new parent. But the guidelines and recommendations have changed so much since your parents were new parents, it's difficult to have confidence. Baby boxes, the latest progression in the realm of safe infant sleep, are said to prevent Sudden Infant Death Syndrome (SIDS) and provide a safe sleep space for your little one. But, how do baby boxes prevent SIDS exactly?

According to NPR, there are about 3,500 unexcepted sudden infant deaths per year here in the U.S. That rate has dropped significantly after the Back To Sleep campaign was implemented in 1994 (and urged parents to put their babies to sleep on their backs instead of their bellies). But, recently, there has been a slight rise in SIDS.

NPR noted that in comparison, Finland (where the U.S. is getting its idea for the baby box program) began giving out baby boxes to mothers during their prenatal medical visits about 80 years ago. Since then, they boast one of the world's lowest infant mortality rates.

But how exactly do they work? According to Pediatrician Dr. Jarett Patton, M.D., Fellow of the American Academy of Pediatrics (F.A.A.P.), baby boxes have been deemed safe because they provide a uniform firm sleeping area. "Baby boxes lessen hazards for sleeping infants," he tells Romper.

Pediatrician Dr. Steve Silvestro, M.D., of Georgetown University Hospital and Metropolitan Pediatrics, elaborates to Romper: "Both the floor and the walls of the baby box are hard. Unlike a crib bumper, it's a lot harder for the firm, flat wall and floor of a baby box to effectively block both the nose and the mouth of a sleeping baby." On a similar note, it's much easier for air to get to the nose or mouth of the baby, even if she is pressed up against the wall of a baby box.

The second reason that baby boxes are believed to be safe is that they are portable. "It's been shown that being in the same room as a baby can decrease the risk for SIDS," notes Silvestro, "as you would be more likely to notice if your baby is having any trouble." A baby box allows you to bring a sleeping baby wherever you need to go.

Education and awareness is key in these matters, as NPR mentioned. And so, by giving away free baby boxes while sharing educational information, the hope is that new parents will make smart choices, and the rate of infant mortality will start to fall.

More Like This
Can You Burp A Baby Too Hard? A Pediatrician Shares Tips For Gassy Tummies
Is It Good For Babies To Be Exposed To Germs? It’s Complicated
Why Do Toddlers Line Up Toys? Experts Explain This Classic Toddler Behavior
The Best Toys For 3-Month-Olds