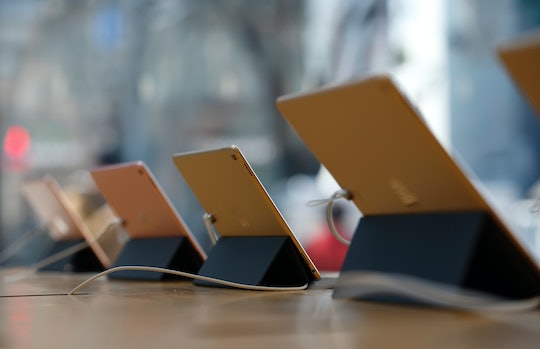 How Do Cell Phone & Tablet Screens Affect Your Kid's Sleep Pattern? It's Not Good News

Parents are well aware of how important it is for children to get a good night of sleep. Parents also know how difficult it can be to achieve that perfect, restful night. Something that can make it even harder? According to a new study, cell phone and tablet screens can keep kids awake at night.

The study, published in JAMA Pediatrics, looked at hundreds of other relevant studies conducted throughout the world on more than 100,000 children with an average age of 14 1/2, then analyzed those results. And according to the study's findings, mobile devices and tablets contributed to difficulty in falling asleep, as well as worse sleep quality, and difficulty staying awake the next day.

On a pretty obvious level, tablets and cell phones can cause children to stay up later. After all, there's always someone else to text, another picture to take, another video to watch. The night can slip away pretty easily with a cell phone in hand.

But even if kids put those screens down right at lights out, the devices can still mess with their sleeping patterns because of good old circadian rhythms, aka the internal clock that activates the melatonin release necessary to help people fall asleep. Turns out that glowing light in your face isn't so good right before bed.

Although the researchers caution that their study suffers from being self-reported data (which means they couldn't create control groups and isolate causality in the same way that they would have been able to in a lab study), their findings were significant across a huge group of subjects. And the issue of screen-related sleep interruption will likely only continue to rise as screens become more all-consuming. As the researchers wrote,

Interventions and policies must be developed, evaluated, and implemented at the population level to raise awareness of the potential health hazard to improve sleep hygiene through an integrated approach involving teachers, health care professionals, and parents.

But for now, if you're a parent of a kid with a screen, consider taking it out of the bedroom, and making sure that your child's bedtime routine is more along the lines of Goodnight Moon than Goodnight iPad.