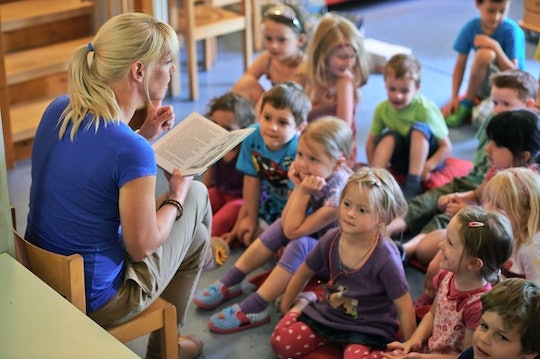 Can Daycares Prevent Norovirus From Spreading?

It's winter, so that means it's the lovely time of year when kids come home with the "winter vomiting bug" — otherwise known as norovirus. While normally associated with close quarter environments like cruise ships, norovirus is notorious for taking down whole schools and office buildings, too. How do daycares prevent norovirus from spreading? Believe it or not, daycare centers work incredibly hard to ensure that the children in their care remain healthy, but norovirus is one nasty and contagious bugger.

First, a quick primer on the norovirus itself: As noted, it's highly contagious. Once someone has contracted norovirus, they can be contagious for up to three days after the worst of their symptoms have cleared up. Norovirus spreads via fecal matter and aerosolized vomit particles — yeah, I know: Gross. And of course, those would be the worst symptoms of norovirus: barfing and diarrhea — usually both, and usually quite violently.

Kids, as the snot-covered disease vectors they are this time of year, are particularly suseptible to contracting norovirus for the simple fact that they don't wash their hands as often as they should — and that's exactly how daycare centers start their first line of defense against norovirus.

The Centers for Disease Control and Prevention recommend that daycare centers and schools should encourage students and children to wash their hands with soap and water as much as possible, especially after sneezing or coughing. And when it comes to norovirus, antibacterial hand sanitizer won't work.

Bleach ALL The Surfaces

Norovirus can survive on surfaces for a shockingly long time — up to a week — and it only takes 20 norovirus particles to trigger an infection. Daycare center staff should routinely clean and wipe down surfaces with bleach solution to make sure that all viral particles are killed. Lysol and alochol-based cleaners aren't enough to kill norovirus: It's bleach or bust.

Depending on the age of the children at a daycare facility, staff can teach children cover their sneeze or cough with their elbows or shoulders instead of with their hands. Like any life skill, it's all about making it fun for the kiddos.

If Your Child Is Sick, Keep Them Home

Having a sick kid is rough stuff, especially when they are barfing uncontrollably. I know this from very graphic, personal experience when norovirus blew through my house like a vomit express train. Even though your little one may have stopped barfing, they can still spread norovirus — so the best way to prevent it from spreading at your child's daycare is to keep them home the extra day or two after the worst of their symptoms subside.