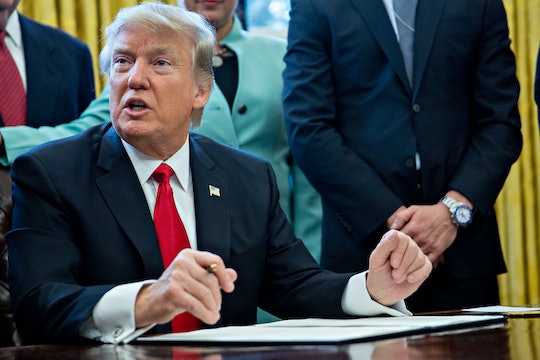 Do Trump & SCOTUS Nominee Gorsuch Know Each Other?

On Tuesday, Jan. 31, President Donald Trump took to a primetime press conference to announce his two "finalists" for the Supreme Court justice appointment. After announcing Judge Neil Gorsuch as his nominee for the Supreme Court, many wondered not just how well the two know each other (Trump famously said, "Was it really a surprise? Was it?"), but, how Donald Trump and Neil Gorsuch know each other at all. According to a report published by Newsweek, Gorsuch is what people would call an "Originalist" or a "Constitutionalist," which means that Gorsuch holds a "strict originalist interpretation of the U.S. Constitution" — for him, there's no reading between the lines as far as Gorsuch is concerned. As many feel the Constitution is a living, breathing, evolving document, those like Gorsuch believe that the Constitution is meant to be read and enacted into legislation exactly as is. For Trump, that news couldn't be better.

During the third and final debate, Trump made clear that if elected president, he would do all he could to ensure that the Constitution be read and interpreted the way it was written. Of the justices he would appoint if given the chance, he said:

The justices that I’m going to appoint will be pro-life, they will have a conservative bent. They will be protecting the Second Amendment. They are great scholars in all cases ― and they’re people of tremendous respect. They will interpret the Constitution the way the founders wanted it interpreted.

Under our Constitution, the power rests with the people, and that was at the core of Justice Scalia’s legacy, and you heard from President Trump’s inauguration that is the core of Trump’s agenda, and that’s very much the core of what Neil Gorsuch’s record is as a jurist. He’s an excellent writer. He’s got sharp analytical ability, strong intellect and he’s got a lot of strength and courage. Those are things that the president very much wants in a nominee.

Though it seems like the two men don't have a personal history together — Gorsuch is just 49 years old and from Denver — it's clear that both men share incredibly close personal views on the way they feel government should be run, as well as how they believe the Constitution should be interpreted. In the wild world of Washington, that seems to be all you need.