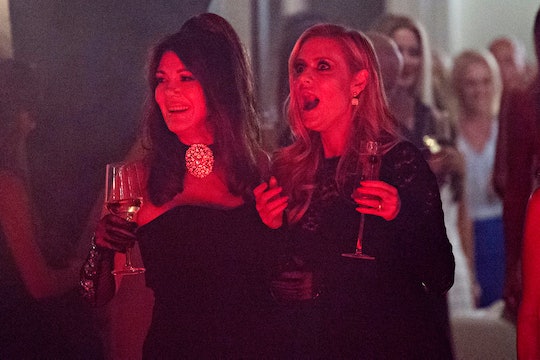 When we were first introduced to Dorit Kemsley at the beginning of this season of The Real Housewives of Beverly Hills, she was described as a friend of Lisa Vanderpump's. As Lisa has proudly taken up the crown (just listen to her tagline) of Beverly Hills, this is a sure "in" to this fabulous and interesting group of women. But how do Dorit Kemsley and Lisa Vanderpump know each other? Apparently they met by chance at a wedding and have remained close ever since.

The two women are obviously very fond of each other from the way they speak about their first meeting. Lisa said that the two met at the wedding of a friend and were immediately struck by each other's glam. Apparently Lisa walked into the bathroom where Dorit was getting her hair done and Lisa said something along the lines of, "Dahling, we're on an island! You don't need to get your hair done!" (At least, according to Dorit's version of things.) Dorit, of course, has her own way of doing things and while Lisa may be able to get all dolled up on her own, Dorit prefers to have an army of helpers to get her makeup and hair done correctly so that she looks nice.

Dorit apparently admires Lisa for her glamorousness, which is apparently even more striking in person, while Lisa loves Dorit for being really down to earth, despite the lavish lifestyle, and for the fact that she's very forthright and will say whatever is on her mind, even if you can't often get a word in edgewise. Whatever it is, from that first moment on, the women fell a little bit in love with one another and continue to enjoy the pleasure of each other's company on the show.

Both Lisa Vanderpump and Ken Todd are very good friends of my husband and I, and we try to get together socially at least once a week for dinner. We enjoyed meeting Kyle and Mauricio. They are such a lovely couple and clearly very in love with one another. We all really hit it off from the beginning.

This much is clear from the Instagram photos alone, in which the three couples are often hanging out together. Whether or not Dorit will get along quite as well with the other women of Beverly Hills is an entirely different story. But as far as her friendship with Lisa goes, I'd say it's a lifelong bond that won't be changing anytime soon.