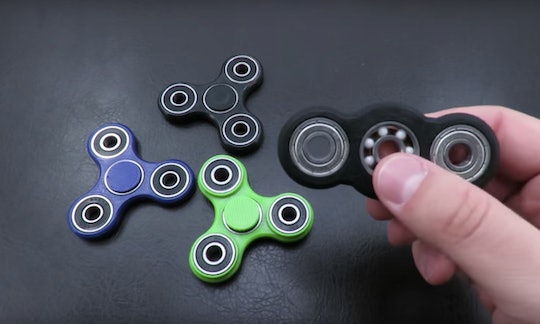 Helping your child manage their Attention-Deficit/Hyperactivity Disorder (ADHD) can be an incredible challenge. Between therapies, appointments, and finding adaptations that actually work for your child, it seems like there is little time for anything else. As research advances, and more adaptations emerge, you often feel like you'll buy anything that's supposed to help. Studies show fidget toys to be a successful way to manage ADHD, but what about the latest trend, fidget spinners? You might be wondering, how do fidget spinners help with ADHD?

According to the National Institue of Mental Health (NIMH), ADHD is a disorder marked by both an inability to sustain attention, and an increased amount of hyperactivity and impulsivity. Fidgeting can increase concentration in kids with ADHD, as mentioned in The New York Times, by "being a mechanism for cognitive self-regulation." As a result, fidget toys have garnered success by being a mindless way to harness nervous energy or hyperactivity in order to boost attention and focus.

Fidget spinners, small gadgets with a moveable middle that allows it to spin, have become the latest craze in the trendy toy market. You play with the spinner by spinning it in your hand, or watching it spin on the floor. According to Time, the purpose of the spinner is to relieve other fidgeting and allow the user to focus better. As Time noted, fidget spinners are intended to stimulate the part of the mind that gets bored, thus, allowing other parts of the brain to focus.

There is a downside to these fidgets, however. They can often be noisy, and contrary to their intended purpose, distracting. Teachers have noted that children often focus on the spinner itself, rather than allowing the spinner to increase their focus elsewhere, according to USA Today. Many schools have decided to ban fidget spinners, Time mentioned, because of the mania they induce due to their current popularity. If your child has ADHD, a fidget spinner may not be the best fidget toy option for school, but, it could help them boost attention and focus in other areas of their lives.