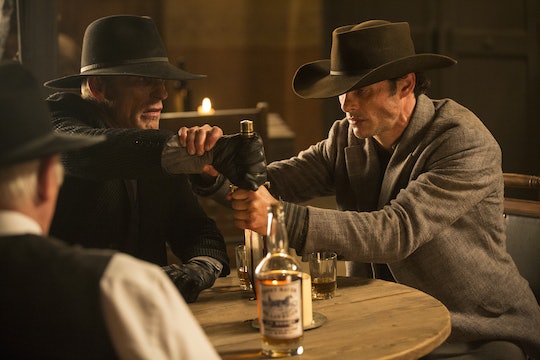 How Do Ford & The Man In Black Know Each Other On 'Westworld'? They Share A Dark Past

On Westworld there's a lot of people that have questionable morals, particularly in regards to Dr. Robert Ford and the character known as the Man in Black. Ford, along with his mysterious partner, Arnold, built the park and Ford's control over the hosts can sometimes seem a bit terrifying. Meanwhile, the way in which the Man in Black treats the hosts, with general ruthlessness and unkindness, is appalling to watch. On last Sunday's episode, viewers saw these two come together and have a nice chat over drinks. There's clearly a history between them, which begs the question, how do Ford and the Man in Black know each other on Westworld?

Fans already knew the Man in Black has been going to the park for the past 30 years, so it's really not all that surprising to believe that he and Ford have crossed paths before now. However, their conversation seemed more intimate than that, as if they have developed a long, complicated history throughout the years. Ford knows the Man in Black is looking for the maze and the Man in Black suggested that Ford's new storyline about Wyatt is meant to deter him from finding the center of it. Naturally, Ford neither confirmed or denied this claim.

The Man in Black then told Ford that he believes there's more meaning to the game and that's what he hopes to find. When Ford suggested the Man in Black just ask him what the "moral of the story" is, the Man in Black retorted that he'd need a shovel because the man he'd ask died 35 years ago. Obviously, he was referring to Arnold, who supposedly killed himself in the park after becoming obsessed with droid creations. The Man in Black stated that Arnold almost took the park out with him, but thanks to his help, Arnold didn't succeed, which suggests he was there that day Ford's partner killed himself.

There is a popular theory that there are two different timelines happening on the show and that William is the Man in Black from 30 years ago. If this theory is to be believed, his conversation with Ford in the present seems to suggest that William and Dolores — who are also looking for the maze — may be involved with whatever led to Arnold's death. It would certainly explain how Ford and the Man in Black know each other so well.

Unfortunately, as is the case with most storylines on Westworld, fans probably won't get any real answers anytime soon. For now, though, you'll just have to wait and see what the Man in Black and Ford plan to do next.