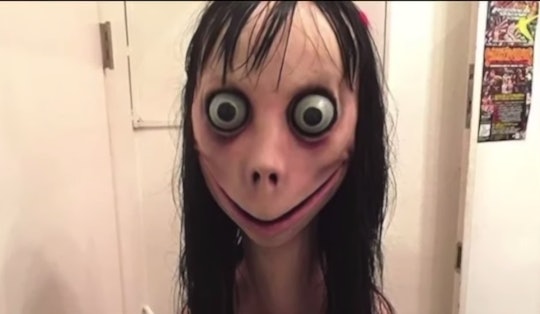 If you've spent any time on social media in the past day, then you've probably heard of the Momo Challenge. This disturbing "game" features the face of a black-haired, bug-eyed woman named Momo. This fictional character apparently texts participants and urges them to complete different tasks — including self-harm. As you can imagine, parents and caregivers are freaking out about the trend. And plenty of them are probably wondering: How do I set parental controls on YouTube?

As Rolling Stone reported, the Momo Challenge isn't new. However, it's making its viral rounds again — and scaring the crap out of parents in the process. That's probably because Momo has reportedly been popping up in the middle of seemingly harmless kids' videos on YouTube. A young child could be watching Peppa Pig or a video about Fortnite on YouTube, and bam — Momo appears, instructing them to text a number on WhatsApp.

The issue has seemingly become so widespread that schools across the UK have been warning parents about the viral videos, CBS News reported. "We are aware that some nasty challenges (Momo challenge) are hacking into children's programmes. Challenges appear midway through Kids YouTube, Fortnight, Peppa pig to avoid detection by adults," the Northcott Community Special School in Hull, England, recently tweeted. "Please be vigilant with your child using IT, images are very disturbing."

Disturbing as all get out, right? So about those YouTube parental controls... What you're going to want to do is turn on Restricted Mode, according to AdWeek. In Restricted Mode, YouTube filters out mature content in search results, and prevents kids from watching videos that have been marked as inappropriate by the YouTube community or indicated that it's for mature audiences by the videos' creators, according to LifeWire.

Here are the steps you need to take in order to turn on Restricted Mode:

`1. On your smartphone, simply tap your profile picture located at the top-right corner of the screen.

3. Move the slider next to "Restricted Mode" to the right so that it turns blue.

Of course, even in Restricted Mode, scary things can potentially slip through. And when it comes to protecting your kids from being dangerously influenced by what they see online, an actual conversation is a must. "How many people watching this have sat down and had the talk with their children about what they're doing online, who they're communicating with, what they're sharing?" technology expert Alan Crowetz told WPTV News. Psychologist Dr. Raphi Wald added, "The way you want to have it is talking about how there are people out there in the world that might try to convince you to do bad things — who might try to convince you to do things you know you don't want to do."

So parents and caregivers, definitely talk to your kids about the Momo Challenge. It's also not a bad idea to start a conversation about online safety and peer pressure in general. And turning on YouTube's Restricted Mode can never hurt, either.