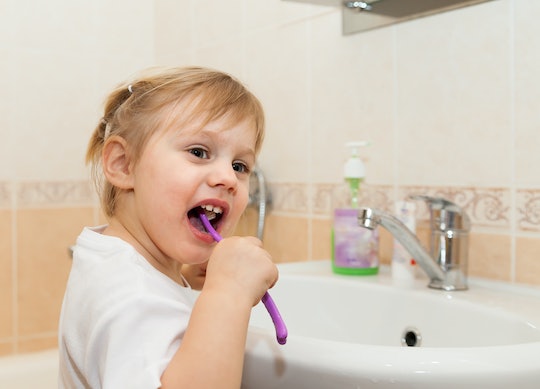 How To Teach Your Toddler To Spit Out Their Toothpaste, Because It's Pretty Important

Kids can be finicky sometimes. While my older daughter loved brushing her teeth as a toddler, my other daughter made me feel like I was pulling teeth (pun intended). With the help of fun, musical toothbrushes and sweet fruit-flavored toothpaste, she began to enjoy brushing her teeth, but way more than she should have. She loved the fruity taste of the toothpaste, so she would try to swallow it like it was some kind of snack. If you’re struggling like I did, you're probably wondering, "How do I teach my toddler to spit out toothpaste?"

While swallowing a tiny bit of toothpaste isn’t going to do much harm, it’s still important to get kids to spit it out. The National Capital Poison Center explained that most toothpastes contain fluoride to help strengthen tooth enamel and prevent the growth of plaque, but it can cause stomach pain and nausea if ingested. If you’re using a training toothpaste that has no fluoride and is sweetened with sorbitol, the website noted that it could cause a slight laxative effect if swallowed.

In order to get your kids to spit, pediatric dentist Dr. MyLinh Ngo suggested that you and your family act as role models by brushing alongside your toddler so that they can try to imitate what they see. She explained that spitting may feel unfamiliar to young children since they have a natural urge to swallow, so it will take time for them to catch on.

According to Ngo, you should start off with just a smear of fluoride toothpaste for kids under 3, and a pea-sized amount for 3 to 6 year olds to ensure they aren’t swallowing too much fluoride. She also recommended getting your toddler their own rinsing cup, which could give them incentive to spit.

With my own daughter, I tried to turn spitting into a game. I would ask her to spit out her toothpaste, so I could see if any animals were living in her teeth. I would pretend to see frogs and bunnies in her spit, which she found to be hilarious. As a mom I’ve learned that when it comes to teaching toddlers, setting a good example and using a little creativity might be all you need. (And some fun toothpaste doesn't hurt.)

More Like This
Why Do Toddlers Line Up Toys? Experts Explain This Classic Toddler Behavior
Real Parents Share What Time They Let Their Kids Rip Into Gifts On Christmas Morning
The 35 Top Toys For 3-Year-Olds
Festive Mommy & Me Holiday Nail Ideas To Try