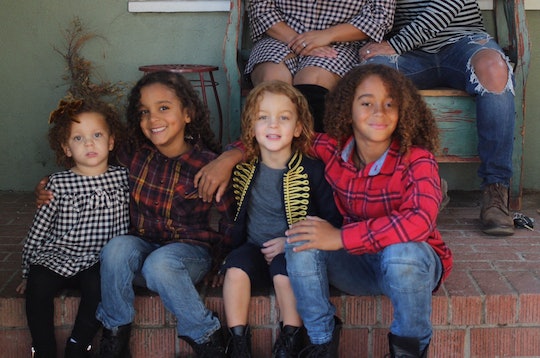 How Do I Tell My Darker-Skinned Son That The World Isn't As Safe For Him?

All my life I heard variations of “What are you?” on a regular basis. My family is biracial, or triple racial or “multi-racial” — the verdict is still out on what all of those consist of. Growing up mostly around white people, the discrimination wasn’t obvious. Mostly, I just felt left out. But when I married a black Irishman and had children, talking about race got a whole lot more complicated.

When we go out in public people are constantly asking us “What are you?” and “Are they all biologically yours?”

As a kid, I never felt like I fit into any one particular “group." At Christian sleep-away camp, I got into an argument with a group of black kids who thought I called one of them a “black DJ” — I had actually called one of them a “fat DJ,” which isn’t nice either. I insisted that I would never say anything racial like that because, duh, I was black. But they didn’t believe me. “No, you’re not! You look like Pocahontas!” they screamed as they chased me around the camp trying to pull my braid. They assumed I thought I was better than them because my skin was lighter.

Around white people, I always felt like the less I reminded them that I was black, the easier it would be. I hated when my family would sing the Stevie Wonder "Happy Birthday" song because it was just so black. I relaxed my hair religiously so it would be silk straight like the girls in the Pantene commercials and never wrapped my hair at night because my white girlfriends didn’t do that. As long as I remained as middle of the road “tan” girl as I could everything would be fine.

Then we had children.

When our first son was born, he was blonde the first few weeks of his life and then his hair gradually started to turn a darker shade of red. When people would ask us what he was I would always answer, “Well, both my husband and I are mixed so now we have a whole kid” and laugh and walk away.

My second son was born and he looked a little bit more like I thought he should. Dark, almost black-colored curls and darker skin than even his father and I had. By then our older son had darkened up a little bit. His skin now resembled something like caramel, he definitely looked like a “mix” kid.

But then came the littlest members of our squad. Our two youngest are very, very, very light. Let’s just call it what it is — they are white and they have very red hair and very light-colored blue and green eyes. If I had not seen my son actually come out of me and delivered him at home, I would have thought there was some sort of switch that happened at the hospital. But then my daughter was born 18 months later looking like a leftover twin who needed another year and a half to cook.

When we go out in public people are constantly asking us “What are you?” and “Are they all biologically yours?” or “How did that happen?”

Well, of course, we know how that happens: when two people are very much in love…

Are some of my kids safer than others? Does society value the lives of my lighter-skinned kids above those of my darker-skinned kids?

It feels like the world has turned upside-down in the past few years as we finally put a spotlight on police brutality. Finally, the wider society acknowledged that black boys and men aren’t safe in America, and I started to wonder how my family fit into the conversation. Are some of my kids safer than others? Does society value the lives of my lighter-skinned kids above those of my darker-skinned kids?

How did I talk to my three boys about what was happening in our country? The speeches that black mothers and fathers feel they have to give to their children before they go into the world on their own — were these the same speeches I would give?

Would I focus my attention on my darker-skinned middle son and explain to him that people may see the color of his skin as a threat and explain that he was to always, always be respectful and demur when dealing with the authorities?

Do I explain to my “white” children that just because of the color of their skin they will be considered the problem and ultimately responsible for coming up with a solution?

When I was growing up I never thought about things like this. I was too busy editing my online N*SYNC magazine for my four readers, or it could have been that I was a kid and kids don’t think about this stuff.

Or it was because I didn’t always really see myself as black and had never been openly discriminated against by white people, so I didn’t think a problem really existed.

I’ve wrestled with how to draw this to a conclusion. A way to tell you that I figured out the perfect words to use with my kids and the correct analogies to draw. But I’m not able to do that.

The logical part of me wants to be able to give my children a clear-cut black-and-white answer. My children are all under the age of 10, so these conversations have not come up yet. When they do, I probably should tell my children of different shades that they have different rules to live by. But the idealist in me feels like I shouldn’t have to give them different rules.