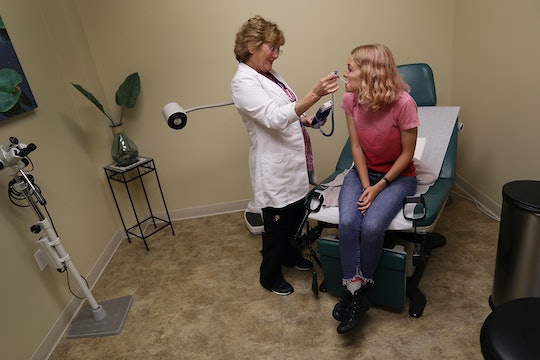 How Insurance Providers Know About Your Pre-Existing Conditions

As of now, insurance companies are no longer allowed to take pre-existing conditions into account when determining a person's health insurance rates. But in the pre-Obamacare days, they used to be able to do so freely, meaning that people with prior health issues were often priced out of affordable care or denied coverage. While top Republicans like Speaker Paul Ryan say that the AHCA will still protect Americans with pre-existing conditions, critics are focusing on the MacArthur Amendment, which would allow states to apply for waivers from various aspects of the health care law. States could potentially get a waiver allowing insurance companies to take into account the "health status" of a person who was reapplying for coverage on the individual market after a lapse. While companies wouldn't be able to deny someone coverage based on pre-existing conditions, they could potentially charge much higher premiums.

So say that the AHCA passes the Senate in its current form, you live in a state that obtained such a waiver, and you're applying for insurance. You'd likely have to share information about your medical history on your application. Furthermore, say you were really desperate for coverage, and concerned about being priced out if you revealed a pre-existing health problem you were dealing with. What's to stop you from lying on your health insurance application?

There are safeguards in place to prevent people from doing that. Insurance companies can request medical records from your doctor in order to verify claims, and in the pre-Obamacare days, they'd sometimes do this if you started racking up suspicious bills. Plus, companies will often check your records via online databases like the Medical Information Bureau while processing your application. If things don't add up, you could get into a whole lot of trouble.

Lying on your health insurance application is fraud, Loretta Worters, a vice president for the Insurance Information Institute, told CNBC. Under the AHCA, if you're found out, your policy could be rescinded, meaning you'd be saddled with a bunch of expensive medical bills.

Many Americans are hoping that the Senate will stop the AHCA before it becomes law, ensuring that people with pre-existing conditions will continue to get the kind of care that they need.