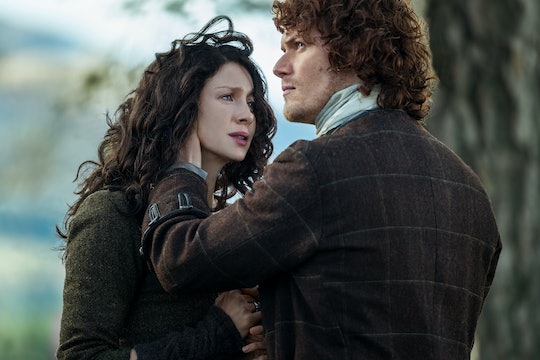 Jamie & Claire's Reunion Will Pack An Emotional Punch On 'Outlander'

Now that Outlander is finally back on Starz, all the Claire and Jamie fans of the world can finally rejoice. Well, almost. The third season of Outlander opens with our two lovers separated by two centuries and the Atlantic ocean. It's clear they'll eventually find their way back to each other but how? How do Jamie and Claire reunite on Outlander? The only thing that is totally clear right now is that it will be an emotion-fest for the ages.

The couple parted ways at the end of Season 2, when they finally accepted that despite all of their hard work, history would not be changed. The Jacobite rising would happen, and so would the disastrous Battle of Culloden that quashed not just the rebellion, but the very Highlander way of life. Jamie resolved to fight in the battle, knowing that he would likely die. So he and Claire decided that she must travel back through the stones to the 20th century for the sake of their unborn child. And as the first episode of Season 3 illustrated, this move, while technically noble and self-sacrificing and all that, basically killed both of them, at least emotionally. Neither seem particularly happy without the other, so it's only a matter of time before they get back to each other.

Outlander fans of the show know that Claire goes back to Scotland with her daughter Brianna after Frank Randall dies. It was there that Brianna met Roger Wakefield, who was just a little chunk of adorableness when he was first introduced on the show as a tiny kid in the '40s. At the end of Season 2, Brianna and Roger figured out that Jamie didn't die at Culloden, and Claire convinced her daughter that she really did travel back in time 200 years and fall in love with an abnormally attractive red-haired Scotsman. At this moment, everyone — Claire, Brianna, Roger, Me — all realized that she must go back to find him. But it has yet to happen, so what gives? Warning: book spoilers ahead!

Outlander book fans know that this emotional reunion happens in Edinburgh, where Jamie is using a printshop as a front for his smuggling business and going by the name Alexander Malcolm. Jamie's always had a bit of problem with staying on the right side of the law, so this business endeavor feels perfectly appropriate. Brianna and Roger's research indicates that Jamie's last known location was in Edinburgh, so that's where Claire goes. But don't expect their journey back to each other to go smoothly.

In the 20 years since their separation, obviously a lot of things happened. When she finds him, Claire has had at least had some time to prepare herself for the meeting. She knows what she's getting into (sort of). However, Jamie has had no such forewarning, so he is, well, taken a little aback at her sudden reappearance. And his life, as ever, is anything but simple. In addition to the printing and smuggling business he now runs, Jamie has found himself the protector of a rather large group of people.

The third season will reintroduce Claire (and all of us rabid Outlander fans) to a lot of old characters, as well as some new faces. We'll eventually see Fergus all grown up, and Ian and Jenny Murray's children (particularly Young Ian) will play a much bigger role than before. Laoghaire is still around to cause problems, but now so are her two daughters. There's always a lot of action in the Scottish Highlands of the 18th century, but I'm more looking forward to seeing how Jamie and Claire can find their emotional ways back to each other once they're finally physically together. It will certainly be a rocky road to reconciliation.