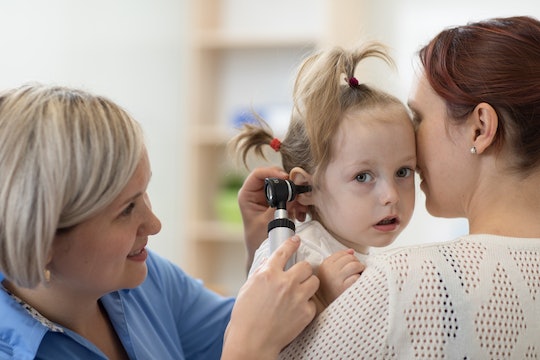 Here's How Kids Get Ear Infections, According To Science

There are very few things worse than watching your child suffer through an ear infection. Unfortunately, ear infections are pretty common, and can be difficult to diagnose and treat. It's enough to make you wonder how kids get ear infections, and if there's anything you can do to prevent them from happening.

According to Mayo Clinic, an ear infection is the general term for a middle ear infection following a viral or bacterial infection. As the American Academy of Pediatrics (AAP) explains, an ear infection happens when swelling in the tiny passages in your child's ear called the eustachian tubes traps bacteria or fluid inside, resulting in pain and pressure. According to the same site, children under 2 are particularly susceptible to ear infections, because their ear anatomy is small and more easily blocked by swelling and mucus.

While Parents reports that most kids will get an ear infection during early childhood, it's not actually one illness. Rather, what you call an ear infection (or your doctor calls otitis media) is the general name for a type of secondary infection that follows a virus, like a cold or the flu, or a bacterial infection, like a sinus infection or strep throat. So, in other words, the key to preventing ear infections is your kids not getting sick. Easier said than done, of course.

Ear infections can also be hard to diagnose, as their symptoms are pretty general — fever, discomfort, and crying — and could be caused by other illnesses. According to Mayo Clinic, many kids get repeated ear infections, which can have complications like hearing loss or ruptured eardrums, so it's worth a trip to the doctor if your child has the symptoms of an ear infection.

If your child shows symptoms of an ear infection, the AAP recommends a doctor visit. They note that your doctor might be less likely to prescribe antibiotics for your child's ear infection, and instead might ask you to watch and wait for 48 to 72 hours first to see if their symptoms subside on their own.

If it seems like kids are getting more ear infections today than we did as kids, that's because they are. As author and pediatrician Ari Brown, M.D. explained to Parents, this is in part due to a larger number of kids in day care settings. As the American Academy of Otolaryngology–Head and Neck Surgery notes, children in day care might be specifically at risk for ear infections, simply because they come into contact with more germs than kids who stay home. The good news is, according to the same site, that exposure to germs might actually improve their immune systems later in childhood.

Brown notes that another cause of ear infections is that commonly used antibiotics are becoming less effective at fighting the bacteria that causes ear infections. According to the U.S. Department of Health and Human Services, if your child is prescribed antibiotics for their ear infection, it's super important to complete the entire course of the medication, and to follow up with your doctor if they continue to have symptoms of an ear infection after treatment.

While there's no surefire way to prevent ear infections, according to the AAP, the best way to reduce your child's risk is to make sure they get an annual flu shot and vaccinations for pneumonia and meningitis, as getting vaccination is associated with fewer ear infections. Other risk reduction methods include not exposing your child to cigarette smoke. If they are bottle-fed, you should never put your baby to bed with a bottle or sippy cup, as this can increase pressure in their ears and trap infection-causing bacteria.

You can also help prevent ear infections by teaching your kids to wash their hands and cover their mouths when they cough. To protect others, you should keep your child home from day care or school when they are ill to prevent spreading upper-respiratory infections.